The blog has served as our primary mechanism for sending our development news to the outside world. Because today officially marks the completion of a year of daily blog posts (except for the one day that we missed for Edmund's birthday), we thought it would be cool to take a look back.

The chart below shows the RSS subscribership for our blog over the past year. It's hard to believe that at one point we were getting really excited about breaking 500. 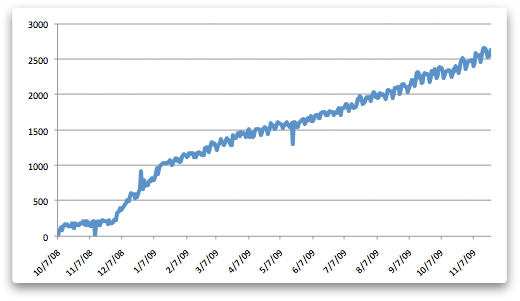 It's also kind of fun to look back at the year's most commented on posts. In reality though the number of comments is likely to be proportional to how "inflamatory" a post was rather than how "interesting" it was.

Perhaps a better, but still not perfect metric for measuring interest is the number of visits a post receives. Here are the year's top 10 most visited posts:

Of course the best way for us to find out what people are most interested in is to hear feedback directly. What do you guys think of this past year of active blogging? What posts have you liked best/least? What posts would you like to see in the future?