In Overgrowth, we are working on creating many unique characters of different species, body type, sex, and occupation. Communicating distinctions between male and female characters in Overgrowth is especially challenging because of some of our basic design choices.

Many games show that characters are female by making them look like strippers. That is, giving them breast implants, tiny waists, heavy make-up, and skimpy clothing, as seen in Tomb Raider, Dead or Alive, Soul Calibur, and so on. This approach certainly sells games and gets banner ad clicks, but it really cheapens the whole experience. Not only is it demeaning to women, but it would also not mix well with animal characters.

In most games with more normal female characters, as in everyday life, there are subtle cues that make it obvious. For example, in Half-life 2, Alyx Vance is not a traditionally feminine character. However, her clothes, hair style, and face and body proportions make it obvious that she is female. For Overgrowth characters, we can't rely on most of those cues because their proportions and clothes are alien to us.

In animated films like Madagascar, Ice Age, or The Lion King, the visual distinction between male and female characters can be extremely subtle. This problem is negated by the voice acting, which makes it immediately obvious. However, we have still not decided if we want to have voice acting in Overgrowth.

There are still significant differences between the proportions and height of the male and female characters, as well as more subtle distinctions in their facial structure. We are also trying to separate their clothing choices in various ways, such as color, style and texture. Finally, there will be important differences in their movement patterns.

Here is a concept drawing Aubrey was working on today, showing a rabbit priestess lighting incense at a lunar shrine. Please let us know what you think in the comments, especially if you have any ideas on this subject! 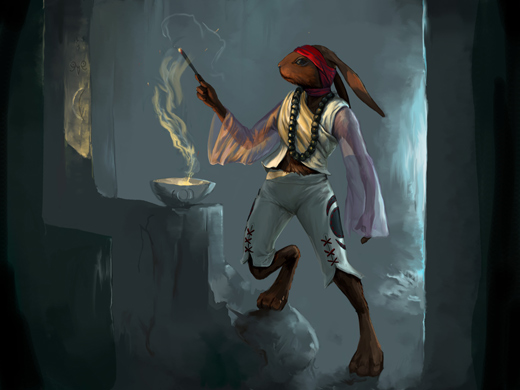