The goal of almost all game designers is to make games that are fun. A common method for giving the player a "fun experience" is to let him start out in a world as an inexperienced noob and then let his character blossom into one of the greatest and most powerful beings in all the land. This sounds like a solid idea, but what mechanics can be used to convey this transition to the player? There are two choices: schedule rewards that will upgrade the player's character stats or give the player analog control over part of the game and encourage him to actually develop some gameplay skills.

Growing up I poured at least 100 hours into Diablo and its stat boosting reward schedule. All I had to do was click on enemies to kill them and at regular intervals my character's stats would go up. Throughout my whole experience this mechanic never changed. The only brain stimulation I got was determining what character attributes I should pump up first and trying to figure out if a new fancy sword that had popped out of an enemy was actually better than my old fancy sword. 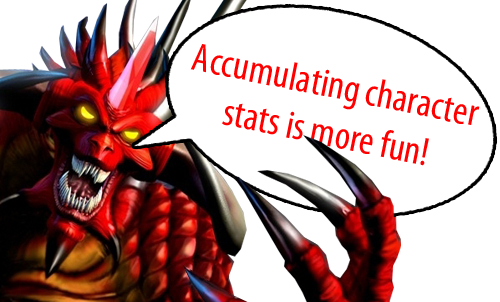 Unreal Tournament also grabbed at least 100 hours of my childhood. Just like Diablo, UT required me to click on enemies to kill them. However, instead of making my strikes easy and automatic, UT gave me direct analog control over my aim and movement. The game actually made me line up the attacks myself. It was a bit overwhelming at first, but as I played more, I could feel myself actually getting better at the arbitrary art of killing enemies. 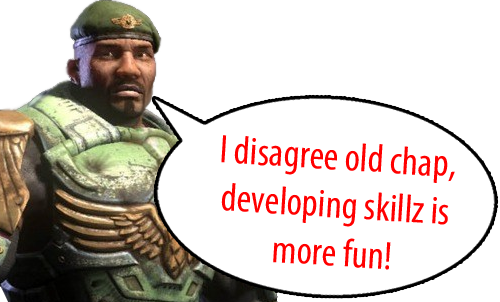 While ridding the world of hell spawn and becoming the grand champion of the tournament were both fun, UT gave me a chance to get good at something while Diablo only asked me to shoot fish in a barrel 100,000 times in a row. If I were to reinstall both games today, I would still have some of my UT combat skills while the data that stored my Diablo XP is long gone. It seems character stats are devices that create the illusion of accomplishment and are thus an inferior form of fun. Game design dilemma resolved... 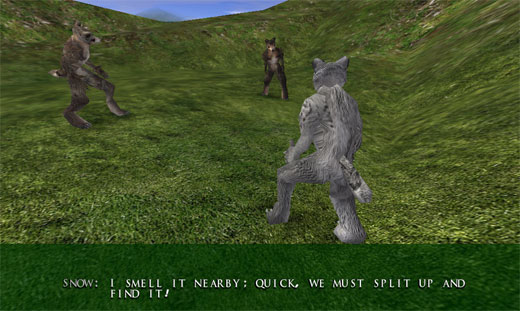 The infamous Lugaru level with the three wolves.

But wait... there's a catch

If you design a skill level challenge expecting the player to be in the valley of leet when they are actually stuck in a pot hole of noob, fun will quickly turn into frustration. While I have heard people proclaim how awesome it is that they can actually feel themselves getting better at Lugaru's fighting system, there are also occasional cries of agony over the skills required to beat the infamous "level with the three wolves".

With a stat improvement schedule, the game designer has direct control over how skillful the player's character will be at any given moment and can adjust the challenges facing the player accordingly. Additionally, the player always knows what he can do to improve his stats if a particular obstacle in the game is temporarily too hard.

Benevolent game designers want to create the most fun for the most gamers. However, skill-based games may not actually scale to distribute fun effectively to all their players in the multiplayer case.

Many multiplayer scenarios involve competition among players. Unfortunately, because of the Lake Wobegon Effect most players will go into battle thinking that they are above average. Sadly competition will result in players being disappointed by the fact that their rank is not as high as they hoped it would be. With a stat system you don't have to exclude any players from reaching a maximum "skill" level.

I can't say with authority that skill based games are more fun than stat driven games. However, it does feel as though skill-based gameplay results in higher quality fun as long as extra care is taken to smooth out major potholes in the solution space. As was done with Lugaru, we are planning on allowing the player freedom to organically develop combat skills and strategies in Overgrowth.

What do you think is more fun, accumulating stats or developing actual (albeit arbitrary) skills? Can you think of any games that successfully combine the two?