Last I checked, Mac OS X had around a 5% market share, and Linux had much less than that (among consumers). I can feel that many PHBs look at this small number and think "5%? Why should I support a whole new platform when I could just blow some more money on brand advertising?"

Obviously supporting Mac OS X and Linux means you tap into another platform and expand your potential market base. That much is clear. But surely adding an extra 5% is negligible, right? Wrong. Not all five percents are created equal. I'm not an economist, just a humble engineer, but let me take a stab at an explanation.

First, here's a breakdown of Lugaru sales by platform: 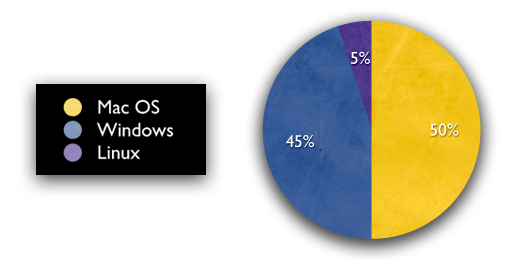 From a short sighted, graph reading viewpoint, supporting Mac OS X and Linux directly increased sales by around 122%. However, this seemingly unbelievable number is actually understated. Here's my attempt at an explanation in five points:

1. It's good to be a big fish in a small pond
As a pretty niche independent game, Lugaru was never covered by PC Gamer, IGN, and other behemoth media publications. However, it was just large enough to get covered in a variety of Mac journals. One website, Inside Mac Games fell in love with it and posted about it all the time.

If you support Macs, even a small indie video game can rapidly spread throughout the community whereas the huge Windows market might just ignore you.

2. More platforms means more opportunities
As an indie video game studio, we don't have many resources in the way of marketing. It's embarrassing how much we rely on serendipity, for example, getting posted on fun-motion right when the admin decides to take a break, or getting called up by Igromania randomly.

We have had more than our fair share of Mac serendipity though. A recent example: Lugaru was promoted in MacHeist's Giving Tree. This generated the equivalent of like three diggings worth of traffic. We were up to 30 requests / second at its peak and dwarfed any event in the history of our Google Analytics. If we didn't have a Mac OS X build, we simply wouldn't have had this opportunity.

3. Vocal minorities
Having a Linux build meant coverage on Slashdot. This of course generated huge interest in not just the Linux version of Lugaru, but the Windows and Mac versions too. Lugaru also made an appearance in a few Linux magazines. A lot of people heard about and supported Lugaru simply because we had a Linux build.

4. You can't choose your evangelists
If you're familiar with Guy Kawasaki's philosophy of evangelism, this shouldn't be any surprise. You'll notice that a small minority of your users will go crazy with your game and spread it all over the place. On the internet, all it takes is one thread on a popular forum, and you've literally got hundreds or thousands of new visitors. Basically, a small amount of your users can make a huge difference for you, and they might be Mac and Linux users.

A notable number of the Wolfire fans who hang out in IRC and spread Overgrowth like crazy are Mac users and we would be much smaller without them.

5. You can't choose your power users
In the same vein as the above, you never know who the movers and shakers are going to be in your community. In Wolfire's case, we are forever indebted to Wolfire forum regular, Silb. He actually reverse-engineered portions of Lugaru and made a kick-ass, extremely popular replacement campaign for the game, providing a huge amount of extra content to other people. His single, epic thread has been viewed over a hundred thousand times.

To conclude, if you're not supporting Linux and Mac OS X from a philosophical standpoint or for the fans, at least do it for the money. If you don't support non-Windows platforms, you're leaving a lot of cash on the table. I don't know about you, but I'm not in a position to just say f--- it to a large community of people who want to support us.