We finally have become the number one search result for Overgrowth! Thanks to turbochop in the secret preorder forum for letting us know! 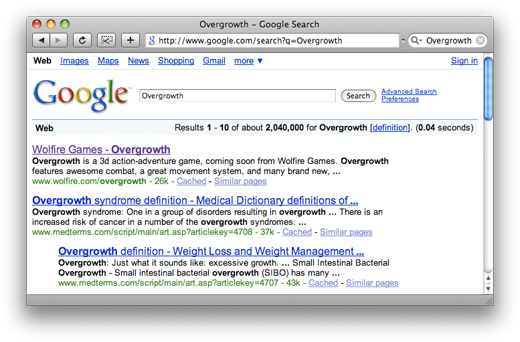 This sounds kind of dumb, but you would be surprised about the difference between the number one result on Google and the number two. One of the biggest things you learn in web development is that you really have milliseconds in order to get someone's attention. You'd think intuitively that if someone reads or hears about Overgrowth somewhere, and decides to Google for us, they'd look through all the results and not be deterred that the first result is not Wolfire Games. Well, our search engine traffic for the keyword "Overgrowth" has just about doubled over the past few days!

We love Google and are very thankful for their benevolent dictatorship. Just for fun, here are ten services from Google that we use extensively.

I could write massive blog posts about each of these services because each of them are critical to us and totally awesome. Maybe I will some day. :)

Google is an amazing company that is pretty much key to our ability to bootstrap Wolfire Games. It is amazing because they are giving us enterprise level applications absolutely for free (well, ad supported in some cases). Most of their stuff puts even the expensive enterprise software that I used at other places to shame and we're not paying a dime.

The downside is that Wolfire is completely hitched to Google, so if they ever decide to turn evil, I guess we will have to migrate to another service? I guess I don't really see the downside! I love Google.