It's time to answer another question in the Wolfire community interview! After the dev studio tour question, the second most popular question, with 38 likes, comes from Swordarm. In typical Swordarm fashion, his question is actually five questions, so I think it warrants its own post with five answers. 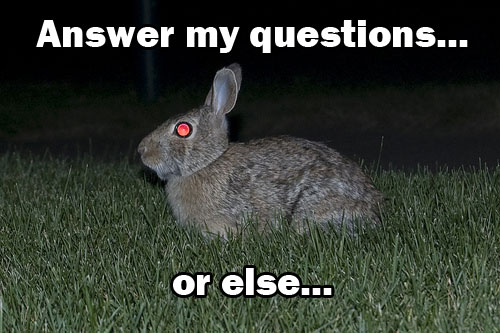 1) Mentioning that studio tour again (great idea from Liam here!). Demanding a video tour of the sacred halls, best including numerous interesting facts as well as a "our daily schedule" feature. Trust me, that's going to be an entertaining hit on Gametrailers & Co ;-)

Already in the works. Be sure to check out John's work space tour. More videos should be coming soon!

2) What are your current plans for the weapon combat? Knives worked really well in Lugaru, swords and staffs didn't. Instead of the reversal mayhem or "ha hit you, dead!!!", I'd like longer, more complex and more cinematic sword battles, with blocks and evading swings and a general high level of bad-assing ;-)
Since you changed the fighting system design document some months ago to make it more Lugaru-ish, that's a point I am worried about.

One major change we are thinking about, which would certainly layer on some complexity is the inclusion of right click as an extra attack button. Two attack buttons means potentially twice the number of plausible contexts that can be used to trigger attacks. Perhaps left click, could trigger aggressive attacks, while right click would call on a repertoire of parries and blocks. I think such a system could easily create the extended cinematic armed battles you are describing.

One danger though is that adding complexity doesn't necessary lead to fun gameplay. I remember a game called Enter the Matrix. They motion captured tons of "complex cinematic" armed and unarmed wire-fu moves. Unfortunately, there were so many moves, that there was no intuitive way for the player to maintain direct control over what was going on. Therefore, while I really enjoyed watching the cinematic mo-cap at first, I was dismayed that the gameplay itself was reduced to spamming the attack keys and praying that something beneficial would happen.

Fortunately, there are "cinematic" effects that don't make fights more "complex". The slow motion effect is probably the best example of this, because not only does it serve to create the 300 effect to highlight cool moves, but it literally provides a means of giving the player more time to think about their next move. This was a fun part of Lugaru and we will certainly have some slow-mo effects in Overgrowth as well.

Now that we have laid the core foundation of our scripting system, we are getting close to being able to address combat directly. We have a lot of ideas about things that would probably be awesome but we don't want to commit to them until they have been thoroughly playtested. We will certainly revisit this topic when we can.

3) The individual levels of Overgrowth will be large, open and open ended, but what the hell happens if the player runs away? Damn you open terrain! How do you prevent the player from leaving the play area, surely you have something better in mind than invisible walls, yes?

If the player has left intentionally then there is not really anything we can (or should) do. However, if they accidentally got lost, that is a failure on our part that we will want to fix as much as possible.

This is a pretty hotly debated issue, with a huge thread in the Secret Preorder Forum. Given that "invisible walls" were not really a problem in Lugaru, we don't really want to make super ambitious plans to implement infinite terrain or the other suggestions before we know that the Lugaru solution is actually unacceptable.

4) Any time frame for starting the work on the combat system and the ragdoll-animation integration? Aka, when will the Alpha be a playable game lol :-)

Ragdoll integration is done. Basic scripting is in and linked to our animation system. While I still don't have an official date for you, I can say with authority that we are getting dangerously close to some gameplay.

5) How much money does the production of Overgrowth eat in a month? (Subways included, you poor addicted programmers)

Because Jeff and I decided months ago that we could save Wolfire a lot of money by living at home with our parents (thanks Mom and Dad!) our living costs are very low. We have occasional small expenses like traveling to miscellaneous game developer events, bandwidth fees for hosting the alpha (although Mow has donated servers which dramatically reduce this), and random other things that pop up.

In reality, our biggest cost is opportunity cost. While preorders mostly offset our humble living expenses, we are not making anywhere near the money we could have by working for a large corporate development studio.

We are not expecting to break even right now -- the fact that preorders are doing pretty well is an unexpected bonus, and we'd like to spend any money that comes our way to make Overgrowth as good as possible. That's why we splurged on speedy computers early on. We are also thinking about ways to spend our recent Organic Preorder Pack money too. In addition to server admin housekeeping, we should hopefully have a few more things to announce on that front soon.