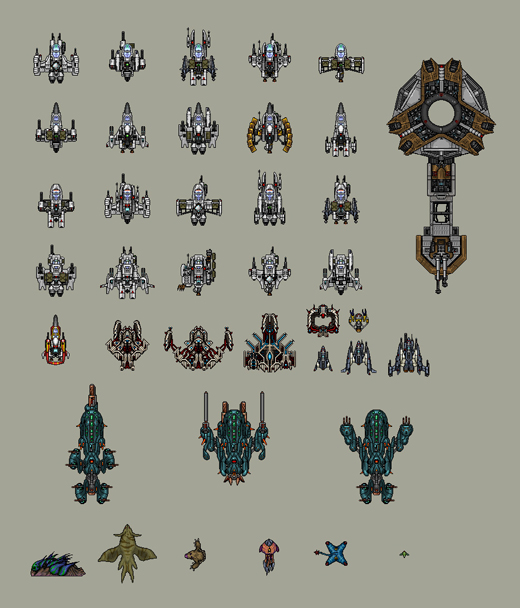 A few games these days still use pixel art, but they usually fall either into the category of "retro", or they are updated to be super high definition. Both of these approaches ignore the strengths of the pixel art style, and its benefits to modern game artists.

Pixel art still matters because there are a number of current, successful platforms that are a natural fit for pixel art. For some types of games, pixel art offers great payoffs for the amount of time and effort invested. Pixel art is also easy to standardize to a certain level of fidelity, meaning that it can sometimes better match the gameplay than a more detailed art style.

The DS, and iPhone are a natural fit for pixel art. Any time you want to have a small but clearly represented character, it is a good style to choose. Because of these system's small screen sizes, space is at a premium, and traditional pixel art packs as much detail into a small a space as possible.

Flash games are also a good fit for pixel art. Often Flash games take up a small window, so you may want to use it for the reasons stated above. However, with web games, there is the additional issue of download size. For games that don't require much animation, there is no better option in terms of getting the most art detail per bit.

Even with modern HD resolutions on systems like the Xbox, pixel art can be a good fit. In 2D games with a highly mobile main character, it is nice to have a smaller character and a large view of the surroundings. A 128x128 px. character is a nice size on a 1280x720 px. for this type of gameplay.

Pixel art has a high payoff

As fidelity in games increases, so does the need to supply realistic details to objects and environments in order for them to seem like their real world counterparts. This burdens an artist with making tons of art assets that have nothing to do with the gameplay or story. I would rather focus on making cool characters or weapons, rather than random props like soda cans (unless I am making a game like Shenmue).

Pixel art is often a good match for gameplay

Many games with realistic graphics have very simplistic gameplay. When there is a mismatch of art style and gameplay a lot of assumptions the player has can be wrong, and this causes disappointment. Sometimes I will play these games and I will try something simple, like opening a flimsy wooden door, only to realize that the door is strictly cosmetic. The more realistic that flimsy door looks, the more absurd it seems that the steroid enhanced super soldier I control can't kick it down. Pixel art's iconic nature lends itself well to the simple gameplay found in most games.

One thing a lot of artists forget is that the first job of game art is to communicate the gameplay. If the art isn't doing this, it is bad, no matter how realistic it looks.

Pixel art is often called "retro", which is the same as saying it has no place in modern games, but cutting edge games don't always need to depend on realistic 3D graphics or physics to do something new and interesting. Although realism can definitely add visceral intensity to a ninja rabbit combat system, social gameplay, AI, and storytelling are all areas that don't require 3D graphics at all. Until gameplay catches back up with art, and bandwidth and screen resolutions get much higher, pixel art will still have a valid place in modern games.