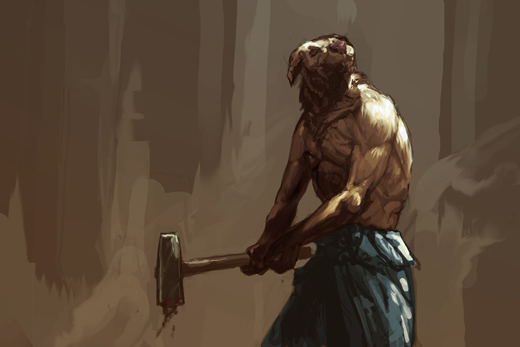 The Sword Breaker clan was known for their metal work and excelled at making armor. The Stone clan earned their name from cutting and moving large blocks of stone. These clans worked together to conquer a small settlement, but when the time came to allot a valuable granite quarry that also had ruins with steel, the only way to resolve it was by duel.

The duel was to be fought between Kaz, alpha of clan Sword Breaker and Tarl, alpha of clan Stone. Kaz sought an advantage, and so held a dinner the night before inviting Stone clan. During the meal, Kaz fed Tarl some poisoned meat. Afterwards, Tarl felt ill and, suspecting foul play, purged his stomach.

Kaz was so confident that Tarl would delay the match, or ask to replace himself as duelist, that he waited too long for a messenger. By the time he realized that no messenger was coming, he had to hurry to the duel without time to put on his armor. Even ill, Tarl forced the unprepared Kaz to concede the duel after only a few passes, causing Kaz great shame.

Kaz was enraged by this, and so one day he and his warriors went to lay in wait amongst the large cut blocks of the Stone clan quarry. They had come in their heavy steel armor, with spears and shields, and took the high ground with their backs to the rising sun.

When clan Stone arrived that morning, the warriors of the Sword Breakers attacked them, taking them by surpise. The dogs of clan Stone had only their simple tools of hammers and chisels, and were outnumbered. Several dogs of clan Stone were killed immediately, but Tarl ordered his clan to climb the blocks around them and regroup.

Climbing and navigating the large stone blocks was second nature to clan Stone, and so they moved quickly and quietly, while the warriors of clan Sword Breaker clumsily pursued in their heavy armor. When clan Stone was out of sight, Kaz of the Sword Breakers declared victory thinking their opponents had fled. Because of the bulky helmets that the Sword Breakers wore it was hard for them to see, and they could only smell their own breath, and so they were greatly surpised when Tarl and his clansmates flanked the Sword Breakers from both sides.

Even though the maneuver forced Kaz to give up his spear in the close quarters, and a number of his warriors were overwhelmed, Kaz with his stout armor and shield seemed confident until Tarl's heavy hammer smashed the great shield he wore. In one mighty rock-breaking blow, the shield bent and the arm beneath it snapped. Kaz was still in shock when Tarl's next blow caved in the chest of his armor. He must have realized too late that while his clan's stout armor could break swords, it offered little defense against something as simple as a hammer.

This became known as the battle of Steel Quarry and to this day, the dogs of clan Stone always enter battle with their great rock breaking hammers.

Overgrowth Alpha 68 Where does DRM come from?