This is the last blog in the series talking about the dog weapons I made a couple weeks ago. Here is the final weapon in that set.

This two-handed war hammer is unwieldy, but can cause catastrophic damage to even the most heavily armored opponents. This is the first clan specific weapon I have made for the dogs. Even though it may not be the most practical weapon, it is very commonly used by commanders of one of the dog clans because it is important to their clan identity. 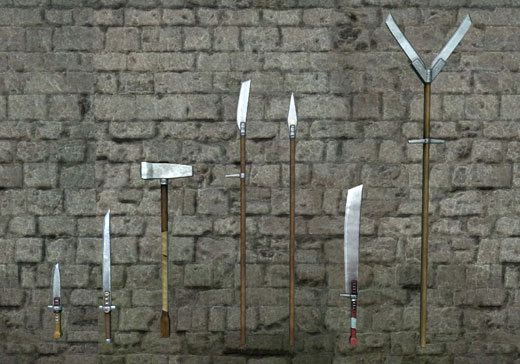 All the dog weapons made... so far

Here you can see the respective sizes for the dog weapons. These are all from around 200 to 350 triangles. Thanks for the feedback! I have actually made changes to some of the weapons since the last time I posted them in the blog. Even when I didn't change them, I ended up doing more research which may make its way into the next set of weapons :)