While everyone else is working on the new game plan for Overgrowth, and preparing the next alpha for release within a couple weeks, Steve is continuing to iterate on the character design for the different species.

After designing the preliminary base models I was tasked with developing Rabbit character concepts for the Lugaru and Arena campaigns. While this was a welcome change from doing purely anatomical drawings, my initial approach was too unfocused. Consequently, the designs were inconsistent and I struggled to develop a distinct Rabbit look.

I decided to start defining the aesthetics of the other Overgrowth species, as my ideas were starting to feel very stale and I hadn’t set clear design parameters to work within. As I progressed, materials, clothing/armor fit, clothing/armor components, and shape language were the key elements of distinction I used to set boundaries.

Before jumping into designing the cultural clothing and armor of the different Overgrowth species, I wanted to have solid three-quarter pose drawings to work on top of. I used this opportunity to fix anatomical issues from my orthographic drawings and to improve the look of the species overall.

For Dog clothing and armor, I started with the characteristics that were already established: rectangular shape language, heavy use of metal and leather, simple/pragmatic design, and loose fit. I quickly sketched a batch of concepts and picked 5 to refine. 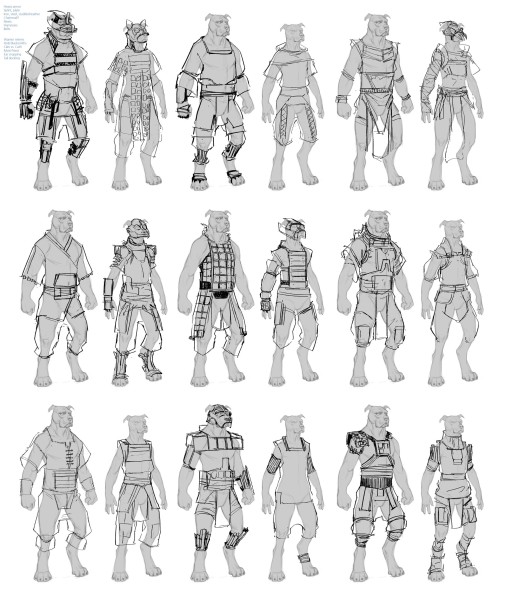 I later returned to further explore Dog armor. Prominent, thick belts and battle harnesses were a couple ideas I had for Dog-only gear. Though Dogs are not an ostentatious society and prefer plain, functional design, I added visual interest through metal and leather color variation, repetition of shapes (studs, rivets, and laminar (banded) plating), and simple embellishments that may distinguish one Dog clan from another.

Given that Cats are largely aristocratic, conveying their wealth and opulent nature through luxurious fabrics, precious metals, vibrant colors, and intricate detailing was important in their outfits and armors. 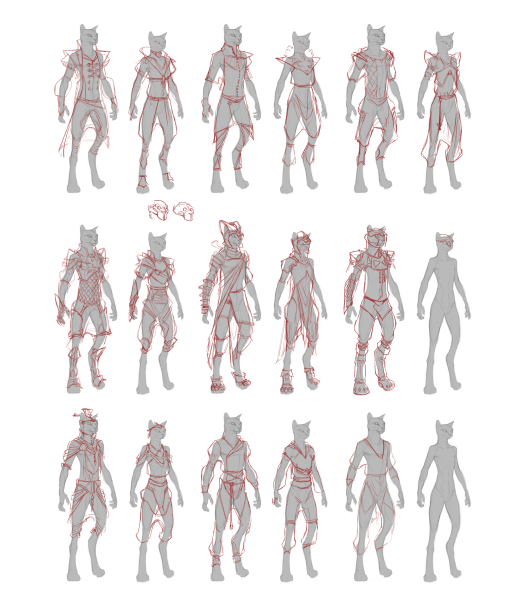 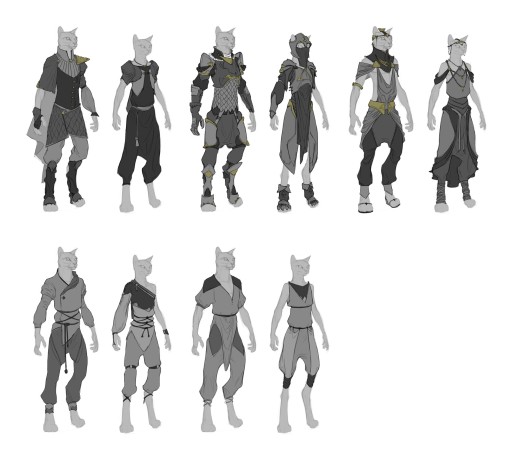 To contrast from the rectangular shape language of the Dogs I settled on triangular shape language for the Cats. As well, I decided to feature chainmail in Cat armor design. While I initially felt that chainmail was too advanced for the Overgrowth world, after learning that humans have been using chainmail from as early as the 4th century BCE, I concluded that Cats have the material, intellectual, and labor resources to produce it. Furthermore, I can imagine the Cats would be quite pleased with armor that provides decent protection, relative comfort, and a slim look! 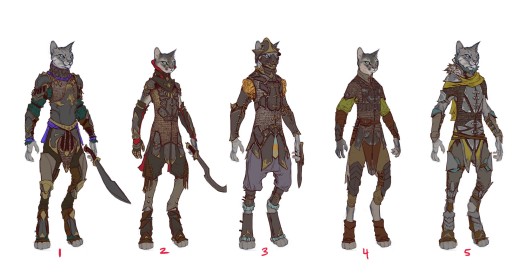 After exploring Dog and Cat styles, I returned to have another go at the Rabbits. I kept some of the ideas I liked from the earlier concepts (thickly woven fiber, knot ornamentation, braided rope) and introduced rounded shape language and asymmetric clothing arrangements. As well, utilizing only plant-based materials (natural plant fiber, wicker/rattan) was a key restriction as I felt it reflected the predominantly peaceful nature and agrarian culture of Rabbits. 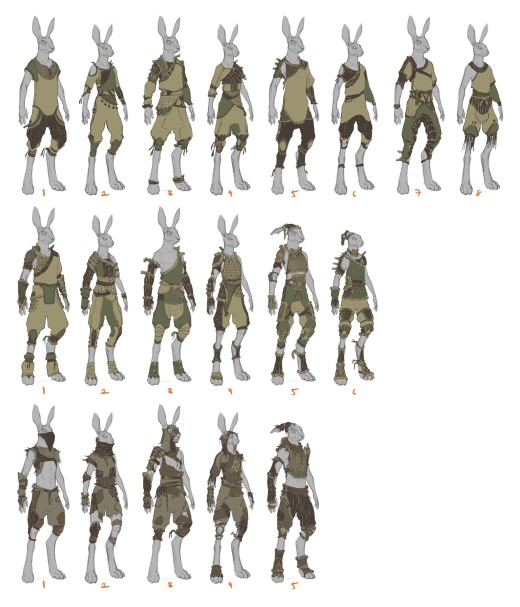 Afterwards, I remixed some of my favorite elements into 3 concept sets for Turner in the Lugaru campaign. Each set shows how Turner’s outfit will change as he progresses through the story and different environments. 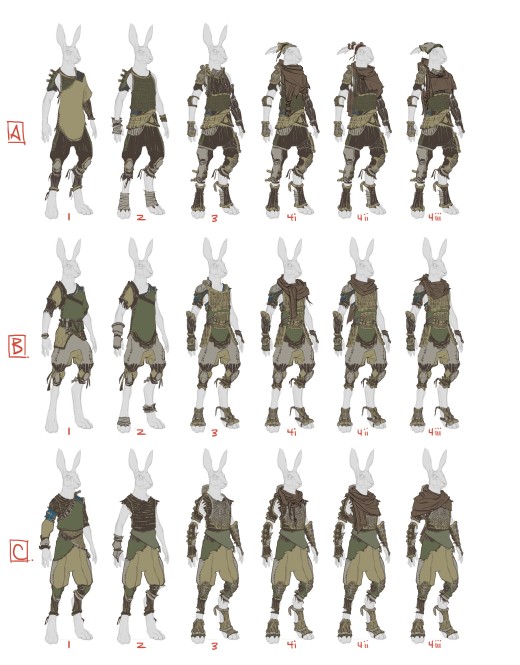 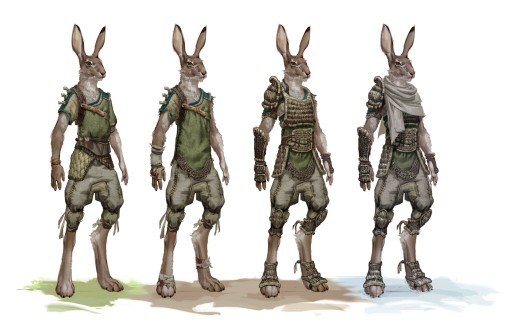 I know a lot of people—including myself—were eager for more Rat concepts, so I was very excited to work on these. I spent time collecting photos and compiling a mood board before starting my sketches to refresh my visual library for the Rats. I repeated this process for the refined Dog and Cat warrior concepts as well. You’ll notice that I made sure to stay away from film and video game sources (except for a screenshot from The Revenant) and to draw from a variety of different inspirational subjects. 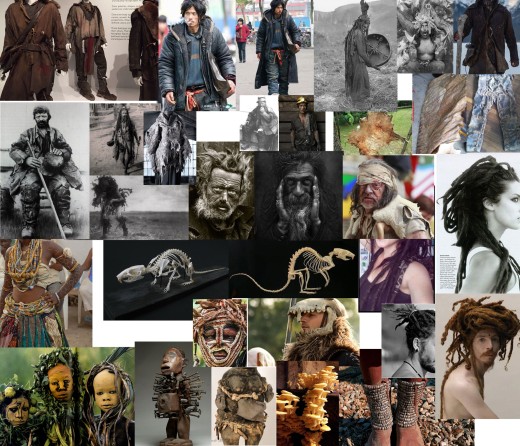 The Rats, being the scavenger species of Overgrowth, are visually distinguished by a ragged and ragtag appearance: tattered and discolored, uneven patchwork, and disparate materials. Additionally, I paired long shirts with poncho or vest-like tops and tried out variations in length to complement their long torsos. Similarly, high-waisted pants or shorts seemed to suit Rat proportions. However, since the scavenger look is pretty unoriginal, the Rats needed a unique twist. Fortunately for me, Rats wearing parts of their ancestors is a really neat idea that Aubrey came up with!

In a society like the Rats where resources are scarce, making use of the remains of kin is not only practical, but could be a form of ancestor worship. Instead of simply wearing the fur and bones of their dead, I came up with more elaborate ways that Rats could prepare and utilize them: ritually dreading the fur of their deceased kin into their own or fashioning ceremonial garb, and carving inscribed bone beads to be worn as talismans or even as armor. Besides these customs, Rat skins can be converted to leather, tendons and intestines converted to sinew, and the muscles and organs used as compost for underground fungi farms (if not consumed during times of famine). I feel like I’ve only scratched the surface of this concept and haven’t visually executed it to it’s full potential, so stay tuned for further updates. 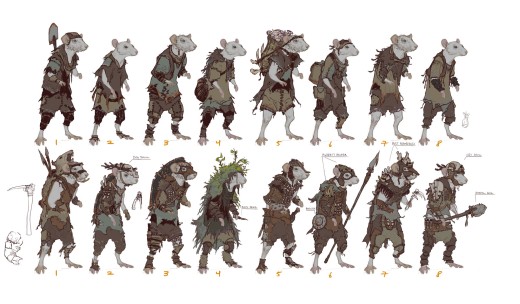 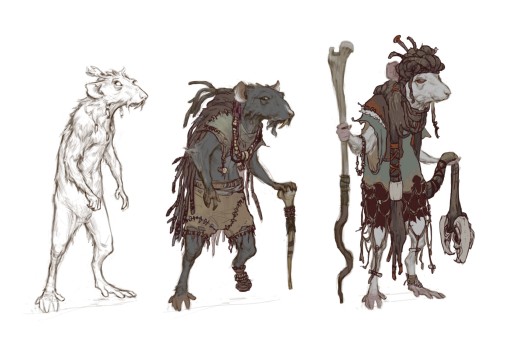 And finally, the Wolves. Since Wolves don’t wear clothing or armor, well-designed anatomy is crucial. I wasn’t satisfied with the upright posture of my earlier Wolf sketches, so I redrew them from scratch with the goal of making them look more feral. I gave them a pronounced hunch on their upper back, thrusting their head forward. This not only makes them look more animalistic and fierce, but it also makes sense physiologically because a Wolf’s mouth is one of its primary weapons. This was also a great opportunity to give their fur some much-needed attention. When designing their fur I concentrated on areas of volume, major planes, direction of flow, and placement of tufts.

Scarification was a neat idea from Aubrey for how Wolves might embellish their bodies. I thought body “paint” might be interesting as well. Wolves may not create paint in the traditional sense, but they would certainly have a nice supply of blood after each kill. The stiff quality of dried blood would also allow Wolves to style their fur. Additionally, white pigment could be created by chewing sun-dried bones into a chalky paste. While adding visual interest is important, It would be great to add context to these body decoration practices through pack identities or some sort of Wolf religion - something to think about! 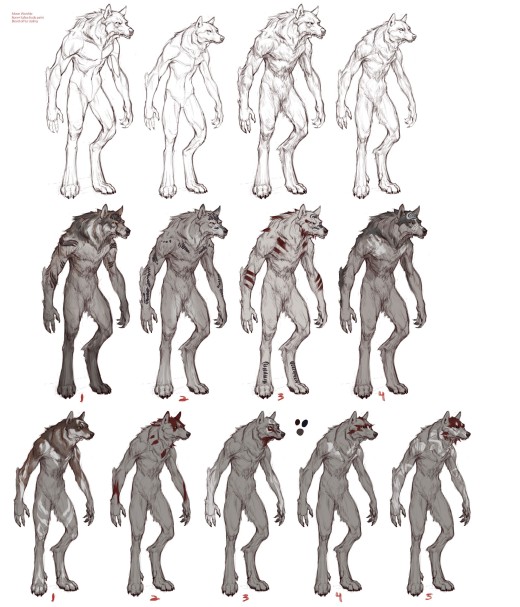 Still lots of work to be done, but I hope you found this post interesting and my progress appealing. Please let us know what you think!