Last week, we demonstrated Overgrowth at the GDC 2012 expo! Since we are participating in their "Indie Open House" program, Gamespy set up a booth for us with three computers and three screens, which you can see here: 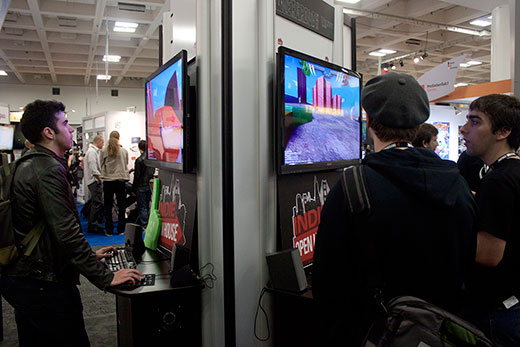 We shared it with the other Indie Open House members: Interabang, Cryptic Sea, and Misfits Attic. If you're not familiar with the Indie Open House, it's a residency program that offers free office and demo space to Bay Area indie developers, in exchange for… nothing! As far as I can tell, they just had some extra space, and wanted to support indie developers. Anyway, when it was Overgrowth's turn, we set up the three screens so one played a single-player level, one played the new local versus mode, and the last one looped an alpha video (muted). 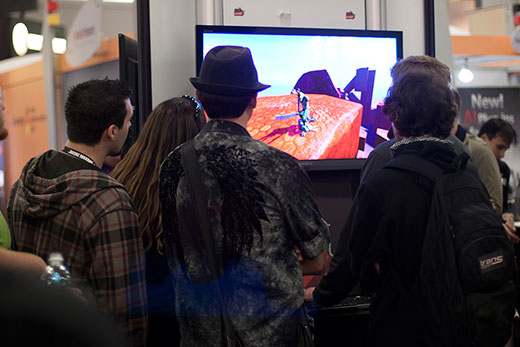 The Overgrowth booth turned out to be really popular -- there were a lot more people than I could handle alone! Fortunately, community members Johannes and Aaron were attending the expo as well, and volunteered to help with the booth. They guided visitors through the single-player and multi-player gameplay, and referred people to me if they had any technical questions. I don't know what I would have done without their help. Since they had the booth under control, I had enough time to have longer conversations with people, and even do a few interviews.


Anyone who goes to GDC can tell you that the best part is not the convention itself, but meeting the other attendees afterwards for parties and events. Along those lines, Johannes set up a Wolfire meet-up at the Humble Bundle office, where we had the first ever Overgrowth tournament. I was beaten 10-0 by John Salstrane, which was a bit embarrassing, but then he defeated everyone else as well. There's no shame in losing to the best! Aaron filmed the event, and put together this video:


Song from the Super Meat Boy Soundtrack by Danny Baranowsky

Jeff and John are avid disc golf players, so Johannes gave them a Wolfire-themed disc as a surprise present. They all went out to try it out, and Aaron filmed its inaugural flight:


Overall, GDC was really exciting! It was great seeing industry professionals have fun with Overgrowth at the expo, and meeting members of the Wolfire community in person. It did take some time away from Overgrowth development this week, but I think it was worth it. I'm not sure I would have time to do something like this more than once a year though. How do you think we should balance development time and attending game events?

Posted in Business Other Press Videos by David Rosen