As we mentioned in a previous post, Jeff and I were recently asked to speak on a panel at PAX about the Humble Indie Bundle.

I think I can objectively say the talk went pretty well. We weren't sure how many people were going to show up because Wil Wheaton (who had thrown down a sweet celebrity tweet during the bundle) was playing a live D&D session with Tycho and Gabe during our talk. However, about 350 people still showed up. Here's a picture of the line waiting for our presentation: 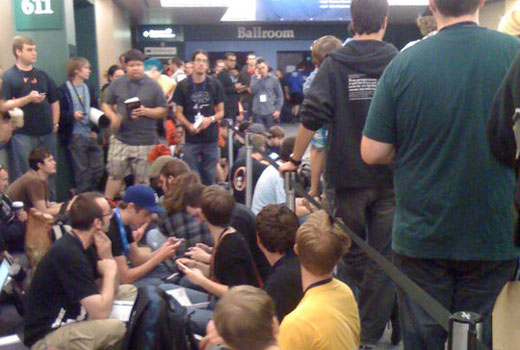 Awesome people lining up for our talk

Our goal was to combine anecdotes about all the sleep we lost working on the bundle with some data analysis (we owe a special thank you to Eric Samuel for helping us crunch the bundle data) and a light sprinkling of humor to keep everyone awake. We got quite a few laughs (hopefully from people laughing with us, not at us) so I think we succeeded on the humor front. We plan to share the insights from our data when we have a chance to convert it to proper bloggable form. 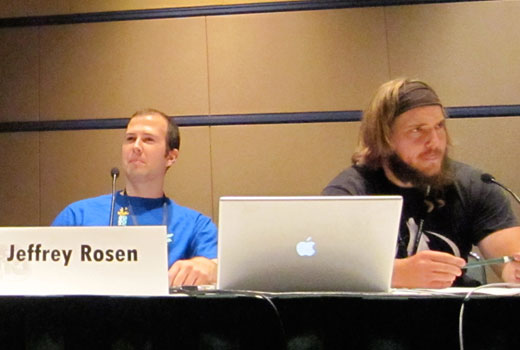 Moments before we began the presentation

Sadly, preparing for our talk took enough time that we didn't have a chance to see all of the awesome things that were going on. We didn't get our hands on Duke Nukem Forever or Portal 2 (in case you were wondering). The lines for those games were super long and though we might have been able to flash our speaker badges and attempt a Ron Burgundy maneuver to cut to the front, we had other things we wanted to do.

The PAX 10 was definitely high on our list of things to see. All the games seemed great but the ones I personally took a liking to there were Altitude, Puzzle Bots, Bastion and Super Meat Boy. The most ambitious indie title there had to be the 3D RTS Hegemony: Phillip of Macedon. Nestled close by to the PAX 10 exhibits were the latest builds of other major indie titles like Monaco, Spy Party and The Witness.

Having been to several big gaming conferences, I have to say that there was something uniquely awesome about PAX. While PAX's exhibitor hall is similar to the commercial trade show environment you can find at other conferences, it also has rooms and rooms filled with board games, consoles, computers and other fun stuff. I managed to get my hands on some games I had never experienced before like Catan and Robo Rally which I played with other indie developers.

It was in one of the giant computer gaming rooms that Jeff ended up playing Worms Armageddon against an 8-year old prodigy. 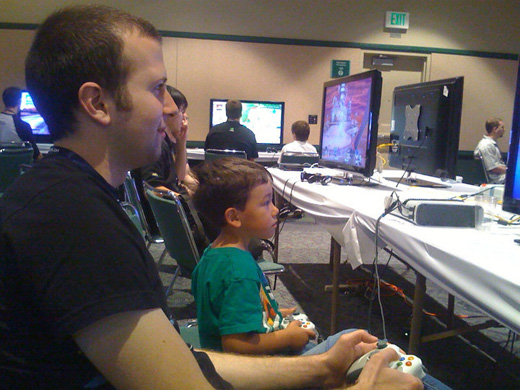 Jeff and I kept lamenting the fact that PAX did not exist when we were young and had tons of free time to play games all day. It's cliché, but the best explanation of the conference truly is that it's like hanging out with 50,000 friends you didn't know you had. GDC caters to developers, E3 caters to the press, but PAX is a celebration of gamers and the games they like to play. It was a real honor to be a small part of the proceedings and next year we are seriously considering going again just to hang out and have fun.