This is a guest art post from Gabriel Verdon who created an amazing rendering of a beaver builder in the fan art thread. Below are insights he was kind enough to share with us about what drove him to pursue art and how this awesome Overgrowth-inspired piece came to be.

How did you get started making art?

I've been drawing since I was a little kid. It was kind of a hobby all through elementary school. Most of that time I spent drawing Dragon Ball Z characters (I drew a lot of them, believe me). Even in high school, when I started taking art a bit more seriously, I still considered it a hobby, as I was planning study film at university. For some reason I ended up applying to the Game Development program at my local college because it was a new program, and since my high school marks were not spectacular I thought I had a better chance of getting in. Unlike most programs, that particular one has all the students go through the same curriculum (most schools split artists and programmers into separate streams so they encourage students to specialize in one aspect). I spent 1 and a half years there before I realized that this approach did not work - while I enjoyed both programming and art, if I wanted to be really good at either of them I would have to focus on one or the other. So I chose art, and then dropped out of the program. I'm now studying (almost) everyday, and working towards a new career in the world of game art! 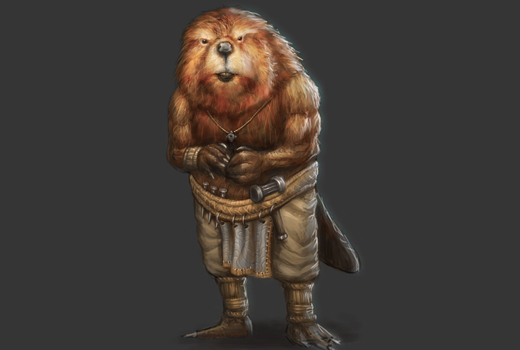 How did you hear about Overgrowth?

I heard about Overgrowth and Wolfire when I was studying game development in college earlier this year. While I was there, me and my game dev friends were always checking up on cool stuff from the indie game scene. I think I first saw videos for Overgrowth on GameTrailers, and from there I found the blog. I sent links to my programmer friends and now they read it religiously because of all the useful tech posts that David writes.

What inspired you to choose a beaver of all creatures?

Well, the first thing I knew was that I wanted to do a character that didn't belong to one of the five official races. I love the whole concept of the anthropomorphic ninja animals, and I think that the Overgrowth world has a lot of potential so I wanted to explore the background lore of the world with whatever race I chose. My first thought was to do a badger character, but I decided against this because I thought badgers were too close to xiss burg's fantastic raccoons in terms of colouration, and that they didn't have any significance to me personally. So I ended up deciding on beavers because they are one of the national animals of my home country, Canada! I also see quite a lot of them in the summer (you can hear them slapping the water with their tails from really far away). There is also a fairly large beaver dam close to where I live, but unfortunately since it's still Spring they wouldn't really be around for me to take photos of them.

As for what the beavers of the Overgrowth world might actually be like, I imagined them to be the great builders and architects of the Overgrowth world. They would be skilled lumberjacks, carpenters, and stone masons, and responsible for building some of the fortifications and buildings that one might find in the game. They are not particularly fond of fighting, but when forced to, their style is extremely defensive. They are one of the few races to frequently use shields in combat (much disdain from the wolves, of course). While stereotyped to be weak and timid, beavers are actually very heavily muscled for their size. They need it to do all the heavy lifting and manual labour that is involved in building things.

What tools do you use?

My primary tool is my recently acquired Wacom Intuos4 tablet, along with Photoshop CS4. Since I don't really do traditional artwork anymore, it's pretty much all that I use (besides some old sketching pencils for doing anatomy studies). Up until a few months ago I was using an old 6x8 Graphire3 tablet, and to be honest, it was almost as good as the one I have right now. So, if you are planning to upgrade tablets in the near future, think twice about it because you could spend that money to pay for life drawing classes or something that would actually make you a better artist.

What was the process of illustrating this character like?

After deciding that I wanted to make a beaver character, I first looked at all of the existing Overgrowth art that I could find and watched all of Aubrey's fantastic time lapse videos (it helps that they have the Overgrowth soundtrack playing in the background :P). I did this not only to get a strong feel for the Overgrowth world, but also to get a good idea of how the anatomy of the creatures actually worked. I also wanted to pay respect to the strong design of the clothing and weapons by trying to match the style, and make my character feel consistent with the Overgrowth world.

Luckily, I saved some process shots so I can run you through it from start to finish.

1) I started off with a loose blob sketch, using this picture as a face reference I didn't really like the way it was going at this point, mainly because I thought the character was too hunched over and clashed with the existing Overgrowth artwork, which depicted the creatures with a very humanoid posture and stance.

2) After scrapping the first attempt, I restarted using a new reference pic. Don't be afraid to scrap and idea and start fresh! Warming up with loose sketches before jumping into a heavier painting also helps (something I probably should have done on this one).

3, 4, and 5) I spent this time defining the beaver's form with shading, and I also did some fur detailing. An important thing to note when drawing fur is to always define the underlying structure first. If you look in step 4 you can see that I started detailing the fur on the face, but I realized I had forgotten to define the muscles and neck area so I made sure to do that first. Only add the fur on afterwards, during the detailing/rendering stage.

6) I started the colouring process by adding some warm oranges and browns in an overlay layer set to 'Color' mode, so that it wouldn't blow out any of the values that I had in place.

7) After duplicating the existing color layer, I set the duplicate to 'Overlay' mode and continued filling it in. It ended up being much more saturated than I first envisioned it, but I decided that I liked the look and kept going.

8 and 9) I switched the background colour to dark grey to make the character pop a bit more, and spent some time defining the edges with a dark outline. The downside to this was that the character was starting to look very flat and two-dimensional.

10) On top of the colour overlay layers I started painting in some clothing. Since I now had a clearer sense of how I wanted the colours to look in the final piece, I rendered the clothing and accessories in colour from the start, instead of starting in grayscale laying on the colour afterwards in an overlay layer.

11) Added in some accessories to give him a bit more character.

12) To remedy the fact that the picture looked very 2D, I added in a bright secondary light source in order to highlight the beaver's form and make him appear more three-dimensional. I also noticed upon flipping the image horizontally that the character looked extremely unbalanced, so much so that he looked like he would fall over. In order to fix this I adjusted his leg position slightly, to make his stance look more stable. I really should have flipped it at the sketch stage though, so that I could have fixed it early on.

I hope this explanation gives you a bit of insight into my process, and I hope there was something in there you found useful :) While I'm not really qualified to answer any art-related questions, if there is something you would like to ask about feel free to send me an email.

I would also like to thank Wolfire for inviting me to do this neat blog post, and for other amazing stuff like the Humble Indie Bundle. So keep up the awesome work guys, I'm really looking forward to playing Overgrowth!

Thanks a lot Gabriel for giving an inside look at your incredible work. In addition to his personal page Gabriel also has a Deviant Art page. You should definitely check them out to see more of his awesome works of art.