This is a guest post from Andrige (aka Triggerman on the NS2 forums). You might remember his awesome NS2 OG Collaboration piece that was created during the Organic Indie Preorder Pack. However, since then he has posted some awesome bear warriors on the Wolfire forums. Andrige was kind enough to let us share them on the blog and provide us with insights about his process and inspirations.

How did you get started making art?

I started out hanging out in the art class-room on my breaks more and more, and I kinda liked just doodling away. After that I just carried on drawing on small pieces of papers that I still keep around. Some of them have ended up becoming reiterated later on in my life. While I was attending high-school however I started modding World of Warcraft and ended up becoming quite popular among those who play druids for making reskins on their forms. After that, gaming (my other big passion) and art kind of converged and I enrolled at Blekinge University of Technology here in Sweden to make games; Mystling (which is a brainchild of mine) being one of them. 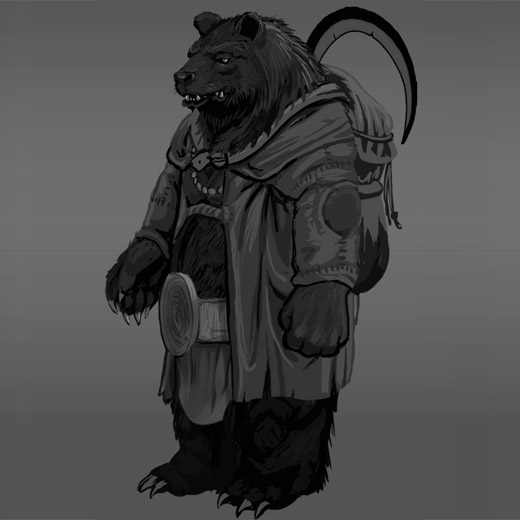 What inspired you to make the bears?

Well I think they are pretty awesome creatures and it seemed like a fun idea at the time when I was sitting in my apartment with nothing else to do. It was also a pretty fun excercise to concept several outfits and creating a culture that defines them. And since I know so little about the Overgrowth universe I can just guess what lives there but try to maintain the general theme. It was a good challenge basically.

What was your workflow like and what was the hardest part?

First off, I'm terribly sorry that I don't have any work-in-progress pictures to show up, but I didn't save any backup-files while I was working so it's hard to show the process behind it. I'm not great at concept art and it has been a while since I did last draw, so I just wanted to get something going basically while I had some free time. I started out doing the basic shape of the body by using a sharp brush with a low flow and started sketching him out with basic shades of gray. After that it was mostly polish and polish on the body with solid brushes and trying to work with a limited palette of gray to add definition to the fur and face until it felt like it looked good enough to use as a base for putting clothes on and such. 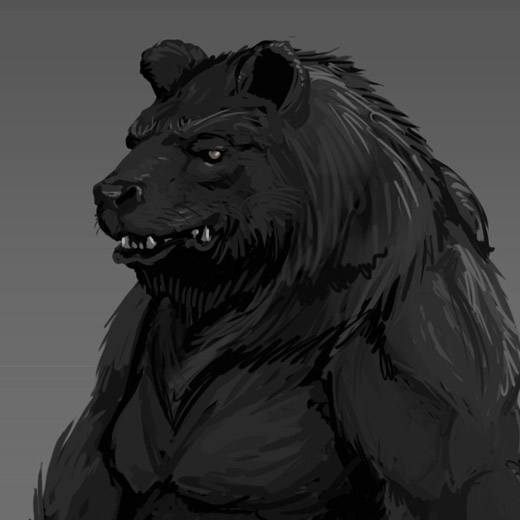 The first thing I started experimenting with was the backpack which I felt would look pretty cool and work with their kind of nature that I wanted to emphasize. Then I went ahead by creating some very simple clothing to use as foundation, as the types that covered more of the body such as the ones that Wolfire have (I checked a piece of artwork on Facebook that shows up three of the races) looked not as good on the bear. I tried to keep it very laid back and shabby to keep it in line with the background I have wrote for them, and the sickle as well as the wooden armour felt just right since the wood complements their character since it's quite heavy and burly, while the sickle is a delicate tool in itself but when coupled with the character it creates contrast. 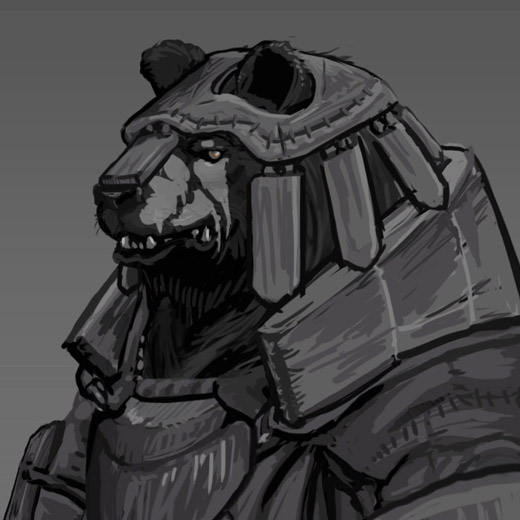 The hardest part in the process was creating the helmet, mostly because finding a good design to use is so much more difficult on this kind of creature since there's a big risk of it looking silly instead of intimidating. All the while during the process I had separated the different ornaments and clothes into separate layers so I could easily try out different combinations and add more things as things progressed. I really recommend doing this approach since it doesn't take long to do and it gives you a wider spread of different looks that can be achieved simply by using what you already have.

Is there a background story for the bears? Of course, I probably had the the most fun creating the background for them, which you can read on my post in the forums.

That's what I have to say about my image, I hope you guys like it. Also big thanks to Wolfire for the feature. I really appreciate it!

Thank you Andrige! Good luck with school and your many game development projects. In addition to his personal site and the site for his upcoming game Mystling, Andrige also has a deviant art page where you can see more of his awesome pieces.