This is another guest art post from Chris Pollitt aka ^_^ on the forums. We've already bragged about him once for his amazing Rat Dude but now he's done it again with the new Red Rabbit. Below are the details he was kind enough to share with us about his development process.

I made the Red Rabbit a good few months ago now with the cheeky intention of switching the main player mesh when the alpha’s eventually progressed to that point. At the time Rabbot was still strutting his stuff and Aubrey was breaking out the new awesome rabbit model for Turner and the wolf. Seeing how nice the fur had been sculpted and painted, I was pumped to give it a try and hopefully improve my fur crafting skill from my previous anthropomorphic adventure; Rat-Dude. 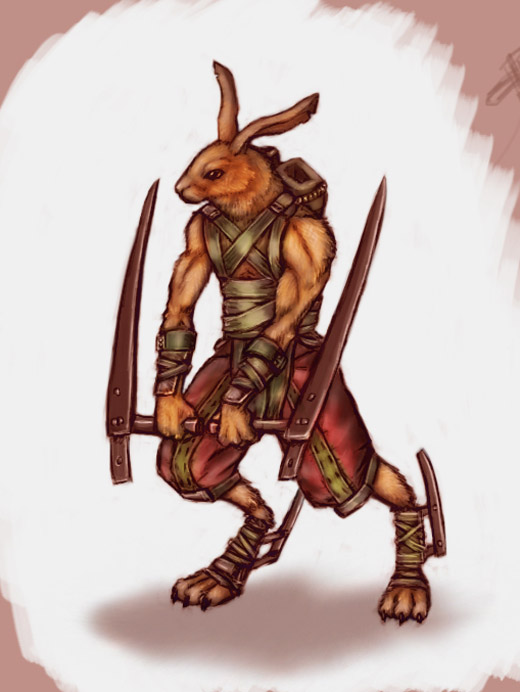 I used pretty much the same technique again for the concept as in Aubrey’s tutorials. I remember there was a lot of skin mods for Lugaru and I guess this would be the next step up in making my own rabbit. Which set the basic outline for the concept as it would be ‘my rabbit’. Where does he come from? Does he have a rabbit clan? Perhaps a clan of strict warriors, dedicated to technique and the honour of battle. Known throughout the eastern plains by the red blaze of their fur and diligent skill with blades, or you know, something cool lol. Warrior monks more or less.

At the time the rigging and animation editor had yet to appear so I wasn’t really sure about the kind of mesh I would need to make in order for it to fit the rig and animate properly so I kept the meshflow as similar to Aubrey’s as possible just incase. Using the turner model as a basis for my sculpt so that proportions would be exactly the same as well. I used a combination of 3dsmax models in zbrush, importing, subdividing and sculpting them with some custom brushes. Although my fur still wasn’t quite as defined as Aubrey’s in the end. Here’s how the sculpt looked from zbrush. 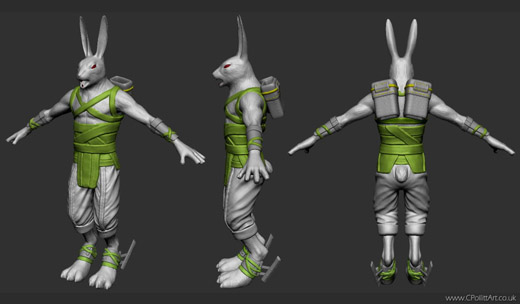 His sword-basket-sheeths looked a lot like jet packs in that shot. Then I retopologized the mesh with zbrush to create the low poly mesh for baking the high poly sculpt onto, still aiming to keep the important parts of the meshflow like joints and the head similar. After UV’ing in max and baking in xnormal I actually did a good chunk of the texturing using mudbox’s 3d painting and it’s array of textured brushes. Although I prefer to sculpt in zbrush due to it’s brilliant zspheres2 and hardsurface brushes, mudbox still keeps the upper hand when it comes to texturing for me personally. I went back and forth between mudbox and photoshop, utilizing PS’s actions are a great time saver when texturing and when constantly dumping a WIP of the texture to check on the model. 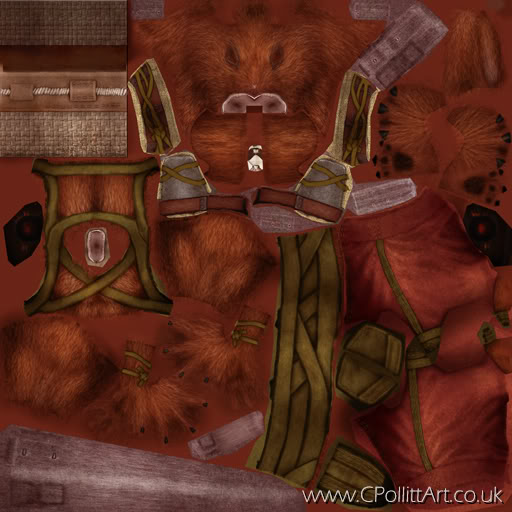 I have to thank Wolfire's art posts for teaching me a great deal of interesting techniques and for initially inspiring me to create both my Rat Dude and Red Rabbit characters. I'm still incredibly envious of Aubrey's excellent fur texturing.

The end fancy render of the Red Rabbit is realtime from the marmoset engine. I’ve still yet to try and switch Robbert with my Red Rabbit mesh, although at the moment there’s no images with his weaponry I did make them as well for when the time comes. Which I am definitely looking forward to.

Speaking of which one of the things I’m looking forward to most when Overgrowth is released is how the modding community will develop. Who knows, clans of players may appear from all over the place, each with their own unique characters and villages. All eager to compete in battle!

Thanks again Chris you are quite the talented artist. Definitely check out Chris' site to see his other cool projects.