In the last year, fans have created many brilliant works of art inspired by Overgrowth, so we're going to highlight some our favorites here on the blog. Today I would like to share a character portrait that Chris, aka "^_^" posted on page 18 of the fan art thread. 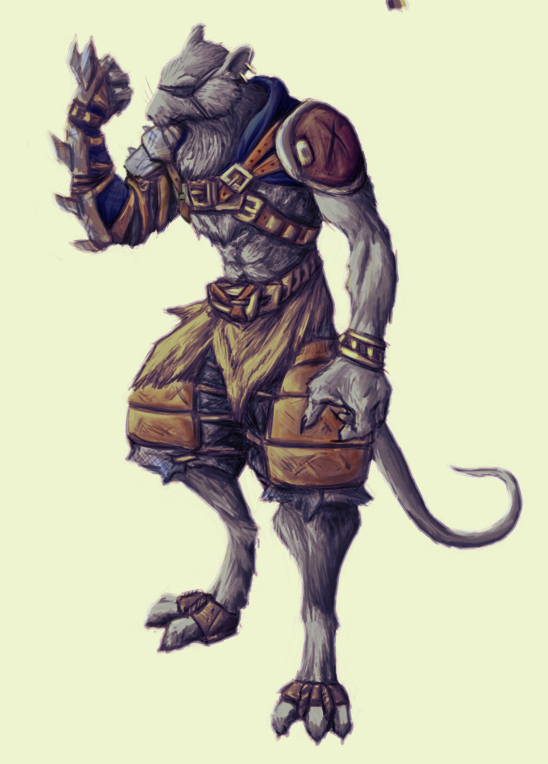 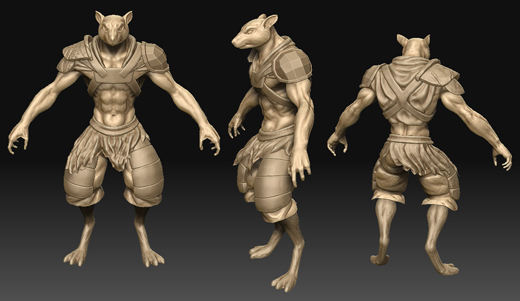 We had the opportunity to ask Chris to tell us a little about the process behind his pieces and here's what he replied:

I was overjoyed with having just pre-ordered Overgrowth and being able to play with the alphas, and I really wanted to do something in that style -- something that could live in the world that the Wolfire team created. My friend had been pestering me to enter the 3D Comicon 09 challenge, so I thought this would a perfect chance to make some fan art. Although there's probably not many anthropomorphic comics out there, I was lucky enough to find that Biker Mice From Mars had a comic... a Marvel comic, no less. I loved that show. I even had all the toys."

I noticed there was a concept art workflow on the Wolfire blog, so I figured I'd try it out and maybe it would help make my art fit in more with Overgrowth's concepts; well, maybe similar, as Aubrey's work is far more awesome than my own. I figured I'd try and make a medieval version of Modo. He has a mech arm, but I thought I could replace that with armor and such. Based on OG concepts, I decided to make his face more rat-like. I still haven't decided on the martian antennae, lol. I'm also a fan of the RedWall series, which Overgrowth and Lugaru always remind me of.

I used Photoshop CS3 and followed the workflow, it's a good tutorial (I liked the use of gradient maps). I made a few thumbnail scribbles beforehand, and once I found one I liked I went straight into it.

As for the 3D, I'm a 3DS Max kinda guy. I can use Maya but I just don't like it as much, lol. I made a quick base mesh in Max, then exported that to Zbrush. Zbrush has to be one of the most awesome digital tools out today, and has the best support, digital sculpting at its best. Zbrush 4 looks awesome, especially with the new GoZBrush and Zspheres features. I'd recommend checking out the ZBrush Central forums, there's some amazing work on there.

Well I think that's it really, thanks for liking my fan art and for making OG and Lugaru. I hope Wolfire does well. And when I do finally get round to finishing the 3D side I'll definitely post it up, heh.

Thank you Chris, we really appreciate your fan art. It boosts morale, and gives us fresh perspectives on how the game could look. Keep it up! Be sure to check out Chris' blog to see his other cool projects. There are a lot of other great artists in the fan art thread -- is there anyone you would especially like to see featured on the blog?