You might have seen the interview on RPS that Alec Meer featured yesterday with Aubrey and me. That was totally awesome and we are very thankful to the RPS guys for giving indies like us a voice.

However, I wanted to draw your attention to another interview that won't be as accessible because it's only going to be printed in Russian, in magazine form. This has already happened to us once in Igromania, but now Ilya Chentsov has decided to bring us to Strana Igr (Gameland) with a massive 8 page article. The interview was fairly unique because Ilya made it a joint interview with Ace Team (the guys who made Zeno Clash) and at the end had us ask each other questions. You can grab the magazine PDF here or by clicking on the picture below. 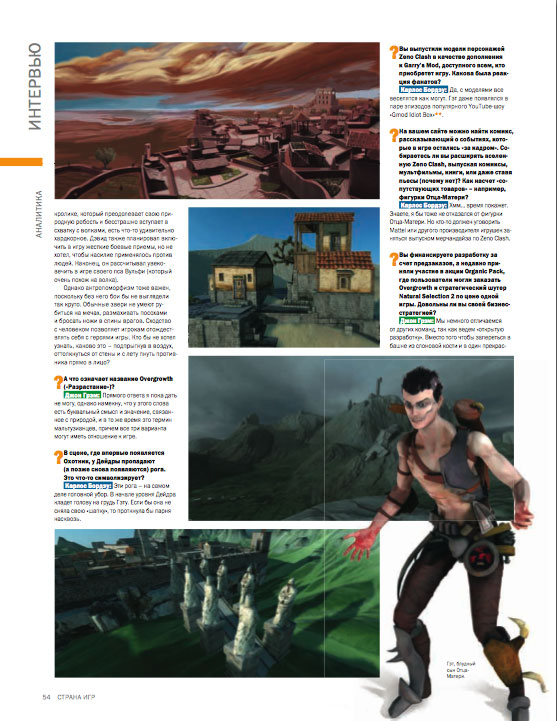 I was a little surprised to see that they didn't include Aubrey's thumbnail with the rest of ours but instead opted to throw down the photo with Anton, Aubrey and the pink beard on the first page. They also seem to have done a good job of sleuthing around to find screenies of David's older gaming projects. Ilya said he'd send us a hard copy so I might have to frame it.

We're pretty sure this amazing opportunity was made possible by the presence the Overt Ops guys have helped us get in Russia. While we don't speak Russian well enough to know how the final printed text came out, Google Translate seems to work pretty well. The original English versions are here. To you Russian speakers out there, we'd be interested to get your impression of how the interview turned out.

I guess that's Russia 2, rest of the world's gaming mags 0. Let me know if you guys can think of other magazines that might be interested. You know how to contact me. Thanks again to Ilya and the guys in Overt Ops for making this possible.