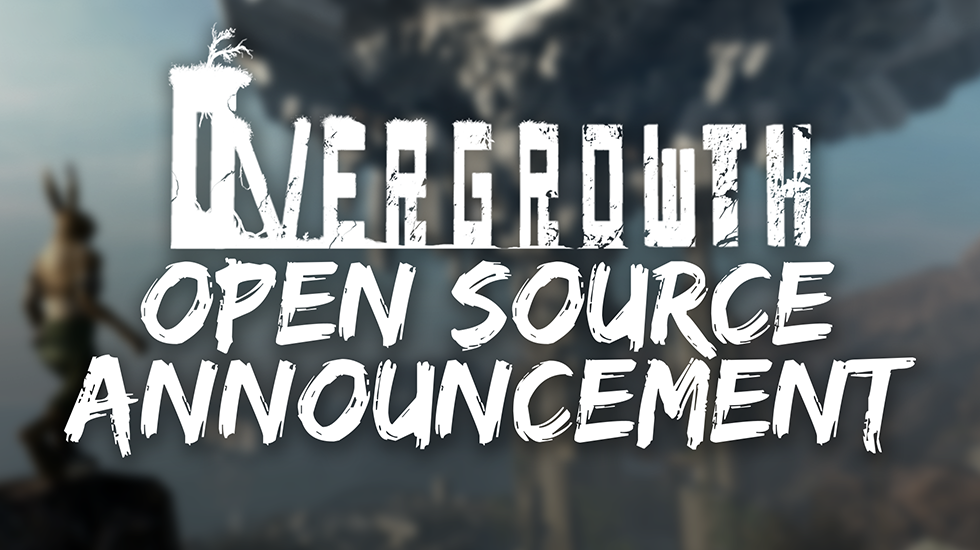 We have worked on Overgrowth for 14 years. It is our longest running, ongoing project, and a massive reason why we have continued to work on the game is the fantastic fan response and following. Not only have people all over the globe continued to play and enjoy Overgrowth for years, but the community has had an enormous impact on the project as well. From the helpful feedback that led to better updates, to the amazing modders who expand what you can do in the game, to the talented artists and creators who expand upon Overgrowth’s style and lore. This game has been shaped and crafted in no small part by the people who play it.

So what's the next step? How do we honor the community that helped build this game? We are pleased to announce that Overgrowth’s code is now open source! Not only that, but we're also permanently reducing the game’s price by a third worldwide, from $29.99 to $19.99 in the US.

Only the code is getting open sourced, not the art assets or levels, the reason is that we don't want someone to build and sell Overgrowth as their own. We're using the Apache 2.0 license, which allows you to do whatever you want with the code, with very few obligations. It’s easy to compile and run the official Overgrowth game using the open source code, so you don't need a lot of technical knowledge to get started.

To be clear, this is not “the next big engine”. Since great open source game engines like Godot exist, using Overgrowth’s engine for your next game project is a bad choice in almost all cases. However, if you‥

Then this is for you, and you can download the source files here!

A few people from the Wolfire community, and the Lugaru OSS project have come together to help maintain the Overgrowth Open Source git repository in their free time. So if you want to fix a bug or add a new feature, submit your changes and these people will consider your code for inclusion in the official repository.

With the git repository on GitHub we want to provide a place for people to collaborate on the code, to make it as useful as possible to the wider game developer community. This is only possible thanks to the maintainers who graciously spend their time maintaining the project. A huge thanks to everyone involved!

If you have any questions, ask them in the official Wolfire Games Discord.

We have wanted to open source Overgrowth for a long time and we are incredibly grateful to our team and community for making this happen. We are excited to see what people do with this code and we look forward to the spirit of Overgrowth living on for another 14 years.

Posted in Overgrowth by Cameron Morris