How to Get the Most Out of Your Mocap

He started by pointing out that motion capture is often perceived as a completely automated process -- a notion reinforced by public figures like James Cameron and Andy Serkis who emphasize the primacy of the actor’s performance, and describe performance capture as just a form of “digital makeup”. This is completely inaccurate! Mocap is just a starting point for animators to work from. Avatar credits twice as many animators as Toy Story, so there was clearly a lot of keyframing going on.

Motion capture has a long history in animation -- it used to be known as ‘rotoscoping’, and was performed by tracing performances from physical movie frames for realistic characters, such as Snow White in Disney’s 1937 film. Animators have traditionally frowned upon this practice because it looks cheap and lacks appeal. It lacks the punch and intentionality of good keyframe animation, and lacks the subtlety of live action, so it is the worst of both worlds. Even in 2D it runs into the “uncanny valley” problem, where it looks almost real, but a little bit “off” in a zombie-like way. 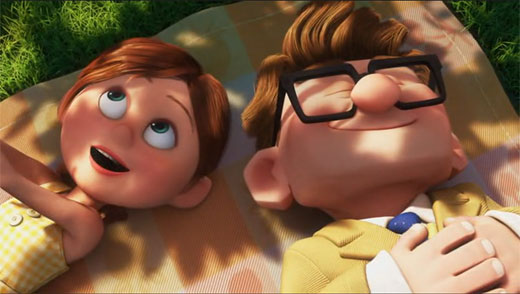 So, why use mocap at all if it has all these problems? It’s a great productivity tool! If used as a starting point, instead of an endpoint, we can achieve the same quality as keyframing in half the time. Without this valuable productivity tool, the quantity of animations seen in many modern games would just not be possible. He then summarized some best practices and common mistakes for setting up mocap shoots.

You need a very detailed shot list in advance, specifying the output filenames, detailed description of the action, number of actors, approximate duration, in/out movement direction, and so on. It should be so detailed that the shot could theoretically take place even without the director present. Storyboards and animatics can also help a lot, so that the actors know where the camera will be, and what the context is for the scene. Also, make sure to handle all of the practical details in advance, like catering, suit sizing, and so on -- stage time is expensive, don’t waste it!

2: Breaking down a script

Dividing a script into individual shots can be challenging, especially if the actors can’t all make it to the shoot at the same time. In this case, it’s really helpful to have one or two “utility” actors who can stand-in for anyone who is missing, so that the cast actors have someone to act against. With this trick, you can record the same scene multiple times with different parts of the cast, and then combine the best performances later.

3: Have an experienced director

A lot of studios use an arbitrary team member as a director, who may or may not have experience working with actors. Don’t do this! Mocap studios will usually have a decent director on call, or you could even use a voiceover director -- just get someone who has worked with actors before and knows how to get the best performance out of them.

Hire professional stunt people and choreographers, and have a detailed list of movements and references so you can communicate exactly what you want. This is mocap, not film or tv, so avoid the bad habits that might come from those media. Don’t pull punches! Wear armor instead, or hit padded props -- contacts can easily be fixed in post, but you need to capture the real movement and transfer of force.

Don’t just use random members of the development team! You can hire actors from acting guilds, and voice actors also work surprisingly well. You can even get people from local theatre or dance groups. They actually work better than film and tv actors in some cases: they don’t have those habits that are helpful for live-action but harmful for mocap. Celebrities are expensive, and extra-expensive if you want to include their likeness as well as their performance.

Rehearse! This seems obvious, but is actually surprisingly rare. You are paying a lot of money just to be on the mocap stage, so don’t waste time and money and quality by rehearsing on stage. So, rehearse ahead of time! Do script readings, build chemistry between the actors, help the cast get in character. This can greatly increase the quality of the performance.

Mark out the sets ahead of time: mark the dimensions of different game spaces using tape, and bring in physical sets for anything the actors need to interact with, like ledges, stairs, or walls. Make sure the actors know what kind of space they are in, so they can react to it, and use the appropriate speaking voice for the room size, and so on. Create appropriate props as needed for physical objects like guns, focusing on accurate weight -- it’s relatively easy to correct sizes in post, but it’s difficult to make a sword or gun look heavy if the actor was just carrying a cardboard tube.

These are basics for shooting any scene in any medium. Always show up on time! If critical people are missing, then you’re burning up time, money and morale. Make sure to maintain a positive atmosphere on the stage: never make the the talent feel like they screwed up, make them feel like you are just looking for ways to make their performance even more awesome. Show that you are taking the whole endeavour seriously, so that the talent and mocap crew take it seriously as well.

Finally, he emphasized once again that mocap is a productivity tool, and not an endpoint. The performance you capture always starts out looking flat and weightless, with no animation appeal -- you need another pass to apply proper animation principles, worrying about silhouettes, arcs, speed, and so on. Mocap also tends to miss subtle movements, such as raising or lowering of the collarbone, so that needs to be added in by hand as well. Sometimes you have to go in deeper, and redo a whole arm movement or even a whole animation by hand.

However, overall it can double your animation productivity if you follow all these best practices, which is a huge win. Just don’t go in thinking it’s a magic bullet!

I hoped you liked this summary! Most of the Hitman mocap images in this blog post are from this related video. The next summary will be about animation in Assassin’s Creed 3!