Amy worked on creature animation for many years, including 9 years at Disney, and 6 years at Snowblind Studios. She loves animals and loves animation, so this is her dream job! Here is a summary of the advice that she gave about animating creatures.

First, start by watching animals in real life at zoos or wildlife rescue centers -- draw them, animate them, be nearby to them and see what it feels like, so you can emphasize that feeling in your work. Try sketching them and simplifying them to the most important shapes, and capture their movements, expressions and attitude.

If you spend a lot of time with domestic animals like dogs, cats, and horses, you can start to read and understand their body language, and know how they act and react to different situations. You can also try to understand animal perspectives by entering non-human worlds by sky diving or scuba diving.

Comparative anatomy is critical as well -- understanding how animals are different from humans and how they are similar. Most mammals are constructed very similarly. People think dog legs bend backwards, but really they just walk on their toes. Hooves are nothing too different either, they are essentially just fused toes. There are a couple important differences, though: quadrupeds tend to have more vertical rib cages while humans have more horizontal, and most of them don’t have collarbones. She showed a video of a horse that had its skeleton drawn on its side to demonstrate its anatomy:

In practice, you want to have a much simpler rig, both for technical performance and for ease of use. For example, the torso of a horse is actually quite solid -- instead of a bendy spine, just use one bone for the ribcage and one bone for the hips. It’s a much better use of resources to put those bones in the neck, which is much more expressive.

Her recent work was focused on animating the giant eagles in a LOTR game, which was a special challenge. Wings tend to look strange when they fold up in a game, so they added a mass of feathers at the “shoulder blade” to cover up any unattractive compression of the wing itself, while revealing the detailed individual flight feathers. With a rigid beak, she also had to find new ways to show facial expressions, focusing on the cheeks, eyes, and mouth corners. 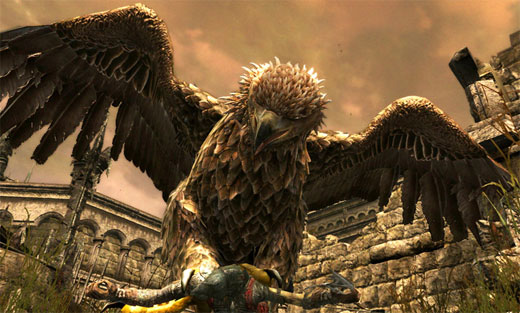 It is also important to study the different kinds of animal gaits, such as walks, trots, and gallops. Gallops come in two varieties: transverse and rotary. A transverse gallop only leaves the ground at one point, while a rotary gallop leaves the ground twice (this looks like a decent site to learn more about gaits).

Normal character animation principles still apply, of course. In many cases you can take the body posture and silhouette of a human pose, and try to map it to the animal silhouette to achieve the same effect. She didn’t mention it explicitly, but showed some sketches that appeared to be from the Disney Sword in the Stone movie, which has a lot of scenes starring Merlin and Arthur in animal form, such as fish and squirrels:

For facial expressions, you can also focus on emulating human-like expressions with whatever tools you have in the animal face, even if there are difficult constraints like a beak or muzzle. She pointed out that with animal characters there is a lot more leeway for animating them with a realistic rendering style without running into the “uncanny valley” issue, especially with facial expressions and lipsync. We don’t usually see talking animals, so we’re not as sensitive if something is not quite right!

I hoped you liked this summary! The next one is all about performance capture, and how to do it right.