Jonathan has been animating games for 13 years, including lead roles on Mass Effect 1 & 2, Deus Ex: Human Revolution, and Assassin’s Creed 3, and recently won the DICE award for “Outstanding Achievement in Animation”.

What is Assassin’s Creed? It was originally going to be a new Prince of Persia game, but ended up becoming its own IP, focusing on efficient parkour movements through realistic environments instead of flashy freerunning stunts through designed puzzles. The movement of the assassin is meant to be practical and smooth, with no interruptions from backflips or other tricks. 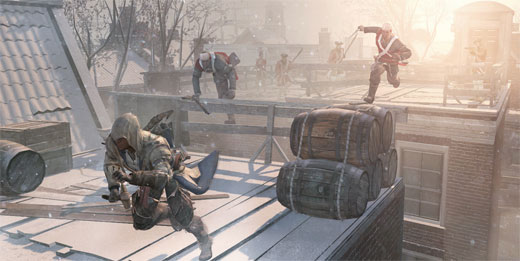 Every Ubisoft game is pitched to the executives using a 7-minute “target video” showing how the game would look in action, so they put together a video demonstrating the key features they wanted in Assassin’s Creed 3 -- such as tree navigation, rope darts, and deep snow. It ended up being greenlit, but the executives said the assassin in the video was too light and airy. They wanted him to feel heavier and tougher, so that was one of the major animation challenges this time around.

They created many thumbnails and character concepts to figure out how this stronger assassin should look. They decided to remove a lot of the armor and other extra clothing that the old assassins wore, and replace it with muscle mass, giving him a broader, but more streamlined look. He has new animations to make his movements look like they use more effort -- in particular, he has a “sprint propulsion” animation at the beginning of every run which emphasizes how much effort he puts into overcoming his significant inertia. 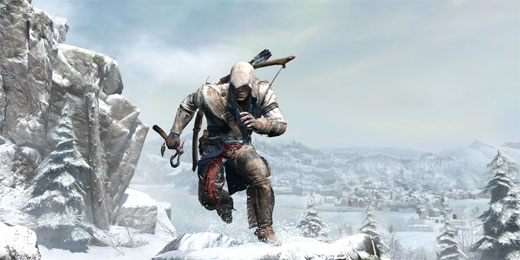 His attacks and assassinations have more follow-through to show how powerful they are, which at first made them seem less responsive. The team solved this problem with a brute force approach, by animating every possible transition in advance. For example, there is one assassination that starts with a jump off a box, and then ends with a run to the right. Or another that starts with a walking approach from behind, and ends with a walk to the left. It all added up to hundreds of animations just for the wrist-blade assassination move, in a detailed matrix including all the possible start and end states.

Many of the animation problems were solved with similar parametric matrices to blend between a large set of animations. For example, there were many jump animations for different heights and distances, and the system would interpolate between the closest ones for any particular jump. They even used pneumatic jump pad to physically launch stuntmen into the air for various heights and distances, and used those performances as mocap foundations to add more believability to the jump animations.

The technical animation team experimented with many different physics-based and procedural animation techniques, but most of them were rejected -- they created this odd effect in which the characters mindlessly react to the environment, and never anticipate anything. They ended up only using a few procedural effects. Here are two examples: First, there is a detailed lean and foot-placement system for turning while running, which was created procedurally, and then fine-tuned by comparing it to real motion capture data. Second, Assassin’s Creed games have always used IK for the detailed hand and foot placement in climbing, but now there is an additional procedural layer for overall body movement, used for reacting to jumps and landings. 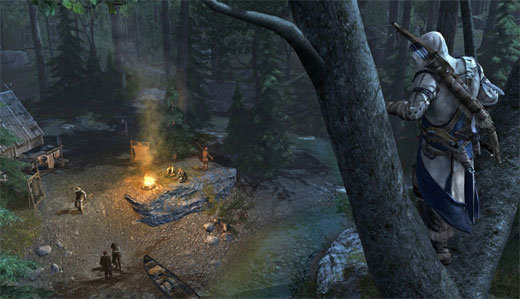 One of the most important secrets of assassin’s creed animation has always been the secondary animation -- such as the cloth simulation on the cape, and the spring physics on the bits of equipment attached to the character. Since these items are driven by the physics system instead of directly keyframed in the animations, they really help smooth out animation transitions and increase the perceived fidelity of the game’s animation. That is why the animation in the assassin levels looks smoother and more detailed than the animation in the Desmond levels.

The force of the new assassin’s attacks is also communicated through the camera: each finishing move has an associated camera animation, which is applied when defeating the last enemy in a group. This allows for close-ups on enemy faces as they die, and impacts reinforced with camera movements. The combat camera is much closer in general, dynamically zooming in and out to be as close as it can possibly be without leaving important enemies out of the frame.

He demonstrated the combat animation process in detail, showing how the actors act out the basic movements, but the curves are all wrong because they don’t actually want to hit each other or move at a dangerous speed. The mocap data is then heavily modified by hand to emphasize impacts, ensure that blows actually connect, and generally increase the speed and energy level.

The non-interactive cinematics were recorded using full performance capture -- that is, simultaneous face, body and voice recording, as popularized by Avatar. As Simon mentioned, mocap is just a starting point for the animation team, but the simultaneous recording is really valuable for getting a natural performance from the actors. With the face cameras, the actors are more confident that details of their facial expressions and body language will be conveyed, so they don’t feel the need to exaggerate as much, or use cartoonish voice inflection.

The talk ended with a demo reel of animation from Assassin’s Creed 3, along with text conveying the sheer quantity of animations of each type. The assassin has 330 jump animations, 220 basic locomotion animations, 280 climbing animations, 210 new assassinations, and 3200 fight animations. There are 3400 crowd animations, and 3000 animal animations! Each animal had its own set of parkour moves so it could follow the player around in the environment, including bears, wolves, foxes, deer, and so on. There were 50 animators and animation coders on the project.

I hoped you liked this summary! The next one will be all about first-person animation.