In most action games, every battle lasts until one side has been completely exterminated. The victory condition is binary -- if all the enemies are dead, you have won. If some of them are still alive, you haven't won yet. This is a traditional design that video games have used since the beginning, but it is evolving much more slowly than other aspects of game design. We're fighting against photorealistic human characters, so why do they still behave like Space Invaders? 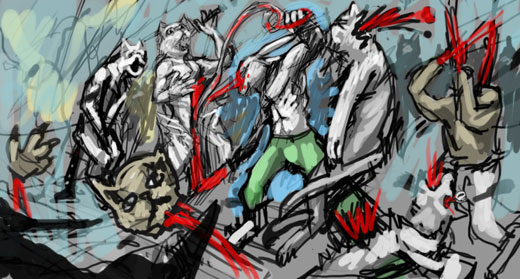 One way to address this problem is to add more ways to defeat enemies than just killing them. This allows the player to make choices by actually behaving differently, instead of just choosing between dialogue options in a cutscene. It also adds a lot of variety to each encounter, making it more interesting to replay multiple times. Here are three examples of alternative ways to defeat enemies in combat without killing them:

In the stealth games, there's often distinction between enemies who are unconscious and enemies who are dead. This is trivial to add because it can even use the same animations and ragdoll technology, and adds a lot of depth to the gameplay -- all of a sudden it's not just a question of whether you beat a level or not... it's a question of how well you beat it! For example, in Thief: The Dark Project, you are rewarded for avoiding or incapacitating guards instead of killing them.

However, Thief was released in 1998. That's 12 years ago. Since then we haven't made much progress. Even in games like Mass Effect and Bioshock which claim to be about making difficult moral decisions, there is absolutely no way to defeat enemies without killing them. You can't shoot the guns out of their hands, disable their targeting sensors, drain their power, knock them out, or otherwise stop them without blowing their heads off.

In Overgrowth, I would like to expand on this idea beyond just knocking enemies unconscious. There are many other ways to physically incapacitate someone in a fight. For example, they could be dazed, exhausted, blinded, crippled, pinned down or tied up. In Lugaru you could knock enemies out instead of killing them, but more forms of incapacitation could add a lot of variety.

Most enemies you encounter in games tend to be thugs, mercenaries or conscripted soldiers -- hardly people with a cause that they're willing to die for. However, usually if you attack a group of 20 enemies and kill 19 of them without taking any damage, the last one will still ineffectually plink at you until you kill him in order to progress. The enemies don't seem to have any kind of survival instinct or plausible motivation.

There are a few rare exceptions. For example, in Halo, the smaller enemies have fragile morale, and are quick to run away if you kill a few of them. Also, in Metal Gear Solid 2, individual enemies will surrender if you appear out of nowhere with your gun pointing at them. However, these games were both released in 2001, and as with incapacitation, there has been very little progress since then.

In Overgrowth, intimidation may be a more common way to win battles than incapacitation or murder. In the wild (aside from predation) most fights between animals are not to the death, but to establish dominance. It's usually quickly obvious who is stronger, and at that point, there's no further need for fighting -- the weaker animal will surrender or run away. Overgrowth would still have quite a few fights to the death, but they would be highlighted by their contrast with the less-deadly intimidation fights.

Usually battles reveal information which is not obvious beforehand. For example, a guard who is shooting at Ryu Hayabusa might realize that he is a magical ninja assassin who can shrug off bullets, or a gang member might notice that Niko Bellic's car has the mass of ten normal cars. Maybe a mercenary leader would notice that Commander Shepard is completely ignoring his feeble attacks, and is instead hacking consoles and searching for loot. This new information could make these enemies more open to negotiation.

In practical terms, this could be related to intimidation. There could be three basic morale states. In the first state, enemies are confident that they will win, since otherwise they wouldn't have entered the confrontation in the first place. In the second state, enemies are shaken, but still think they have a chance. In this state, they won't surrender, but they might consider some kind of compromise. In the third state, enemies are terrified, and will surrender unconditionally or run away.

Is this really possible?

You might be thinking, "There's a reason that nobody's worked on this in the last decade, it's because it's too hard to have realistic alternatives to killing! It causes all sorts of story branches and duplicated content!" Story branches are difficult to manage, but these alternatives don't have to cause branches. For example, if you're defending a village against raiders, then no matter how you defeat the raiders, the village survives -- there doesn't have to be a whole alternate storyline for every possibility.

The design and scale of Overgrowth is still very flexible and reactive to real-world time constraints, so I probably won't have time to implement all of my game design ideas. This has led me to avoid talking about them on the blog because I don't want to make grand promises that I can't deliver -- but I also want to see what you all think about them. Do you think I should post more speculative Overgrowth design ideas, or only talk about what has already been implemented?