Today is our last day in Lyon. In a few hours we'll be boarding another Fokker 100 on our way back to San Francisco. Game Connection was an incredible experience and we're extremely grateful for the Level Up scholarship which allowed us to attend for free.

At first, we were a little dubious of the value of Game Connection for a tiny, indie developer like us, since the airfare alone is pretty expensive. But now that the conference has ended, we can say with confidence that Game Connection is an amazing opportunity and we highly encourage every eligible indie to apply for the scholarship next year. Here's why Game Connection was awesome:

While GDC focuses on the art of game development and E3 caters to the press, Game Connection is all about bringing people in the game industry together. Normally, when you want to talk with another company, you have to send tons of emails to a generic address, and more often than not, your emails don't make it through. As an example, we had a lot of trouble getting a response to our NVIDIA developer program application. But now, after showing Overgrowth to a bunch of their engineers, we're on the fast track to getting in the developer program, which will give us better tech support and seed hardware. We also had great talks with Intel, AMD, Apple, Havok, and other technical companies. 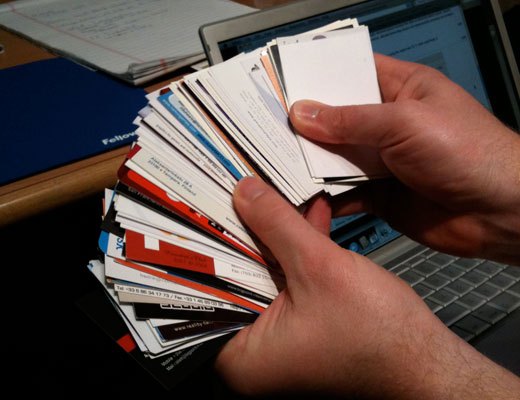 We strategically positioned this stack in plain sight on our table to look like a big deal.

We met with an unbelievable amount of people in just three days, collecting over a hundred business cards. Many of them were sympathetic to our cause and decided to preorder after hearing the story of Wolfire. So the plane trip ended up being subsidized a little bit!

For a long time, we felt like the new guys, not really knowing anyone outside of our indie peers but at Game Connection you might find yourself having lunch with people like John Cook and Shaun Smith who made two of our favorite games: the classic Carmageddon, and one of our current go-to games: Duels of the Planeswalkers. It's crazy how even industry hot shots are often approachable, perhaps because most of them were indie when they started too. Now we feel much more connected in the industry and have many new friends from all over the world.

It was awesome explaining the concept of Overgrowth to companies who are used to dealing with 100-person AAA studios. We got a lot of insightful feedback from tons of big names in the game industry. Our meeting with Epic's Mark Rein was especially awesome. We were really motivated by the fact that even though the alpha is still pretty rough, the majority of the responses we received were extremely positive. Visitors to our cubicle were consistently shocked when they heard how small our team is. We still have a lot of work to do, but it's nice to know that even the industry experts seem to think we're headed in the right direction.

We saw a lot of exciting up-and-coming video games. We're not supposed to reveal many of them yet, but we're inviting their creators to write guest blog posts. It's hard not to talk about some of the stuff we saw, but hopefully we can soon.

While we sadly never made it to the local Subway, it turns out that there's other delicious food in Lyon! Below are pictures of some of the elegant food served at the conference. I don't even know what some of this stuff is, so feel free to help me identify it. All I know for sure is that it tastes excellent and doesn't come out of a toaster oven. The desserts were especially fancy -- each was adorned with a small flake of gold leaf! We ate them, hoping to improve our self-worth. 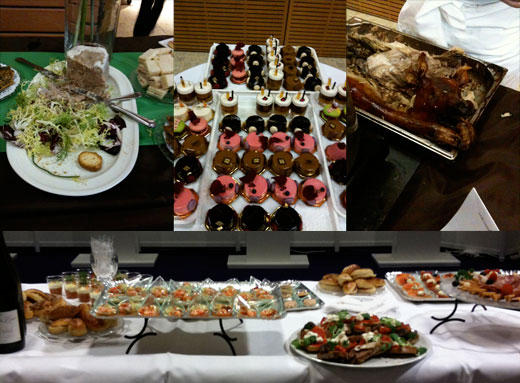 The food would have made the conference worthwhile all by itself.

We met with a long time blog reader at the conference: benblo. He is an awesome dude! 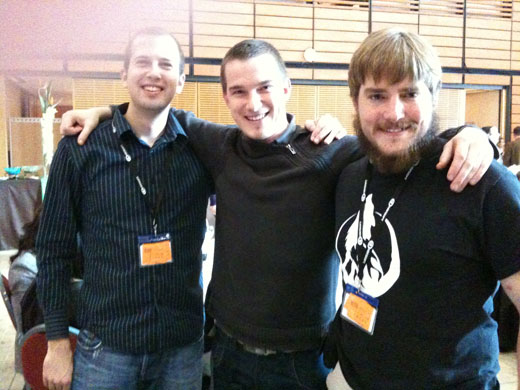 Another great community interaction occurred when we realized we forgot to bring a keyboard and mouse. Jeff posted this fact on our Facebook Page and immediately Rémi, a local, offered to let us borrow his! I was already on my way to buy one, but we were certainly grateful for the offer -- thanks Rémi! It's pretty amazing how global a Facebook update can be.

Thanks again to Game Connection for providing us this amazing opportunity with the Level Up scholarship!

Ironically, Havok and many other companies are from the Bay Area like us, so we have a bunch of follow-up meetings back at home. ;)