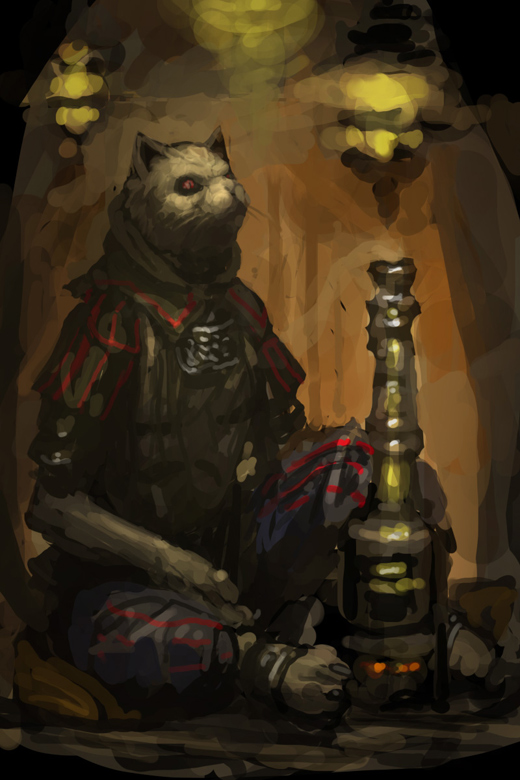 The scent of Valerian root used to be considered pleasant and harmless, an intoxicating delicacy. Now, it haunts the nightmares of the cat nobility. It's the signature of the assassins of the Bright Tapestry, a mysterious cult said to smoke a dangerous Muridaen drug cocktail that makes them impossible to defeat or escape.

The Bright Tapestry was created by Alshain De Carbonel, a royal duelist who refined killing to such a deadly art that the other cats would rather endure his heinous insults than face him in battle. Deprived the primal rush he felt from dueling, he sought a substitute, and found it in Muridaen drugs. He lost himself in a haze of Valerian smoke and Acacia Berlandieri, weaving the threads of his duels into what his detractors called "some kind of obscene dance." As the years passed, he started to accumulate followers: disgraced, drug-addicted duelists eager to learn his techniques, and unable to find such a potent cocktail anywhere else.

Alshain grew to hate himself for what he was doing to his body and mind, and the despicable company he kept. His mind felt muddy, confused, and sluggish. His body was still strong, but unrecognizable to his former friends. The lustrous brown fur that he was so proud of had faded to a matted, filthy tan, and his famous green eyes were sunken and blood-red from smoke damage. Finally, as the sun rose after a long night of smoking, Alshain had his vision. The gods showed him how cat society was a tapestry, corrupted, soiled and torn by endless unresolved feuds. He saw that the only solution was the threat of death, and only he and his followers could deliver it.

Posted in by Aubrey Serr

How Google should have acquired EtherPad Bonjour from Lyon