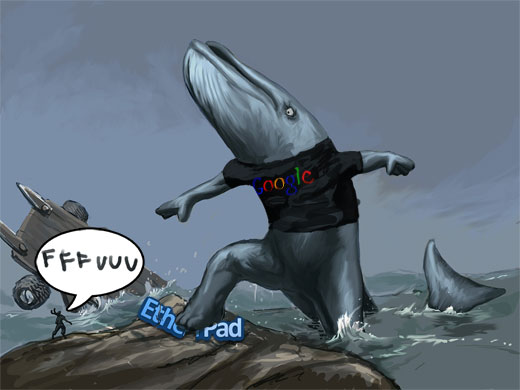 How the acquisition probably went down.

EtherPad is one of my favorite companies and we have mentioned it from time to time. If you missed it, EtherPad is a bare-bones but technologically advanced collaborative text editor in your browser. You send your buddies a link like "http://etherpad.com/test" and anyone who clicks it is instantly greeted with a notepad-like interface to a simple document. Any change made to that document is broadcasted to the other participants in real-time.

At Wolfire, we used EtherPad daily. We all work remotely, so any tool that helps us collaborate is great for us. We liked EtherPad so much that when I implemented our fancy new blog system, I added in support for EtherPad instead of using a regular text area so that we could all work on the same blog post at the same time. Other uses range from quick brainstorming sessions to transcribing our YouTube videos with fans.

Earlier today, Google purchased EtherPad, and immediately shut it down without warning (not exactly the holiday surprise we were hoping for from Google). Old pads are still available for a few months so you can retrieve your data, but no new pads may be created.

Google is known for its acquisitions, but typically when Google buys a popular web app it embraces the app and tries to improve it. The destruction of EtherPad struck me as somewhat un-Google, since they are famous for their "Do No Evil" mantra. Normally, I'm the first to defend Google, as we use 15+ Google products every day. However, EtherPad represents a huge loss to us so I wanted to call Google out on this.

I don't want to simply whine about losing an awesome tool. Here are some guidelines for how I feel Google should acquire popular companies in the future while causing the least amount of harm and "evil".

Leave the product up and running for a while to ease the transition.

I first learned that EtherPad was acquired because I logged into the Wolfire Blog to write a new post. Where the embedded EtherPad usually is, I saw a huge notice saying essentially, "ATTENTION USER: We now own EtherPad! EtherPad no longer accepts new pads." Great... Google couldn't even let EtherPad run for another few days. After paying an undisclosed amount of money to purchase EtherPad, it's certainly Google's legal right to shut down the service or even redirect it to some offensive site if they wanted to. However, there's a spectrum of "evilness" of things you can do to the website, and completely shutting it down (to new posts) without warning is definitely not good.

A better solution for consumers would be to leave the service up and running for a reasonable amount of time to allow people to migrate off of the platform.

Improve your own products until they are good enough for existing users to migrate.

Although it probably costs very little for Google to maintain and continue the operation of EtherPad.com indefinitely, it's unreasonable to expect them to keep it running forever. So how long should they be expected to keep it up and running?

I think they should wait until they've improved their own product to have the same functionality as the previous one. Google Wave is similar to EtherPad in the sense that your changes show up in real-time in the same shared document. However, that's where the similarities end. Their use cases are very different, as you can see by the huge outcry against the death of EtherPad among tech people (even though they have access to Wave). Google Wave is a complicated communication platform that, according to Google, is primarily targeting email, social networks, instant messaging, and other similar communication apps. EtherPad is simply a real-time collaboration tool that lets multiple people modify the same text document -- nothing more, nothing less.

Until Google improves Google Wave or Google Docs to the same level as EtherPad, or introduces another product with similar functionality to EtherPad, killing Etherpad is not a "good" or even "neutral" act. Since there is no reasonable alternative, I propose that Google has hurt many people by shutting down EtherPad and it was at least a little bit "evil".

I wonder what Google's side of the story is...

Improve transparency to your customers.

Maybe Google has a completely reasonable and non-evil reason for terminating EtherPad the instant it was acquired. However, I don't know because they didn't communicate it to me nor is it possible to reach them by email, phone, fax, or even Google Wave (they don't have any public contact information). I might feel pretty stupid if it turned out that Google had a great reason for kicking everyone off EtherPad without warning (Vimeo style) but I don't, because it's not in Google's single, official PR statement.

I don't believe that Google purchased and killed EtherPad just to dismantle a Google Wave competitor. The products weren't really targeting same audience. Wave is a very complex communication platform, aimed at being the next email, forum, and comments system. On the other hand, EtherPad was the raw essence of simple text collaboration which clearly differentiated it from Wave and Docs. Surely Wave's adoption was not going to be hampered by a tiny collaborative text editing tool. Even if it were, it's not a sustainable business practice to simply buy off your competition, and I have no doubt that several good EtherPad replacements will eventually pop up.

Given that it does not hurt Google to continue running EtherPad, why is it acceptable to simply kill it and leave perhaps hundreds of thousands of previous users without a collaborative text editor?

This post was written in the sad, forgotten carcass of an old EtherPad document. Currently the best way to collaborate on a document is to find an old EtherPad link and re-use it, since it's still possible to modify old EtherPads (for now).