Up until now, Overgrowth has been using the default Windows and Mac file browsers to load objects. This is functional enough, but it's slow, ugly, and no fun. One of my favorite things to do in games is to scan through all the cool items and upgrades one can get. At their best, these inventories have the same appeal as consumer catalogs (anyone remember the old lego catalogs? those were my favorites). A lot of games have done a good job capturing the thrill of consumerism: e.g. The Sims, Diablo, Little Big Planet. I think these games are successful in this respect for at least three reasons:

1. They showcase items in a clean, visual inventory.

3. There's a critical mass of items, and new ones are continually added through mods, expansions, and procedural generation.

Usually these principles are applied to in-game looting, but I think they can also be applied to level editing. In fact, I think this is a big part of how The Sims and Little Big Planet make editing fun.

Right now we're working on #1. Here's a picture of the preliminary browser: 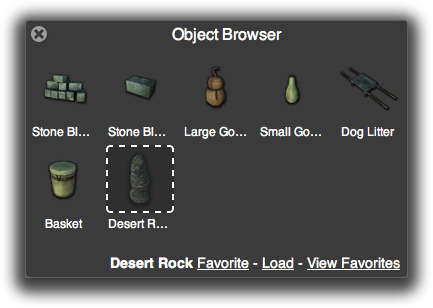 The preliminary object browser. Items can be favorited for easy access.

#3 is also a high priority for us; it's a big part of why we're focusing so much on easy modding and community generated content.

#2 suggests some interesting new possibilities. Perhaps achievements in Overgrowth could open up new assets for level building? For example, maybe you can't place wolves in your own levels until you've defeated a wolf in the game. Maybe you can only add the Mythic Cudgel of Whalemanic Justice if you've already found it in its secret cave.

What do you guys think about incorporating consumerist gameplay into the level editor? One potential problem is we don't want to limit players who just want to make an awesome, unrestricted mod. Any ideas on how to support both options? If we just let players toggle a switch, it sort of ruins the fun of working hard to unlock everything.

And, do you guys like how the object browser is looking so far?

P.S. Anyone in SPF should also check out Jo-Shadow's mockup suggestion of a more intricate content browser (see thread too). It's quite awesome.