We are going to have lots of different cultures in Overgrowth, not just for each different animal species, but for sub-groups within each species. In order to plan out the background of the game world, we have had a few discussions about the specifics of these cultures and their relationships to their environment.

My job in all this is to help visualize the differences between the cultural artifacts produced by each group. Among the things we considered are the various technology levels, raw materials available, different belief systems, and different aesthetics of each culture. It's also important to make the broad strokes visually distinct-- after all, there isn't any point in going to all this effort if the player doesn't notice, or if it seems random.

Here is a very rough sketch breaking down common visual themes by species: 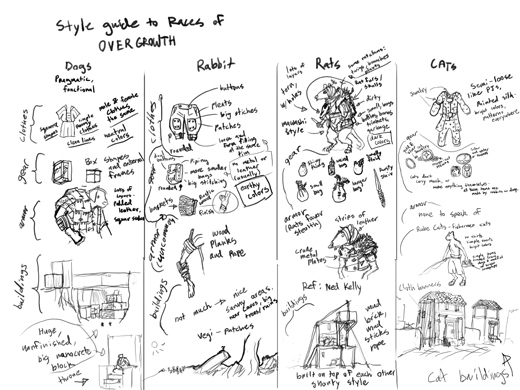 Within each broad category there will be subcultures that are different. What kind of subcultures would you like to see in Overgrowth?

Some examples of subcultures that we were considering include:

Map Editor Video Why we have live support