Receiver was finally released on Steam today -- check it out here! There is a one-week launch sale bringing the price down to $3.99. If you already have Receiver or Overgrowth, then you can claim your Steam key on your Humble Store download page (linked from your purchase email).

Whenever a game is greenlit, there are always two questions that come up over and over: "How did it take THIS LONG for this game to get greenlit?", and "How did THIS game get greenlit?" In this post I will try to answer both questions about Receiver!

We put Receiver up on Greenlight the day it was announced, because … why not? There was no fee yet, and we had no luck getting it on Steam via the traditional method. Receiver already had a pretty significant following thanks to our supportive and vocal community, and great ‘Let’s Play’ videos like this one from Robbaz. So, when we got set up on Greenlight, it didn’t take too long to reach the top 20! 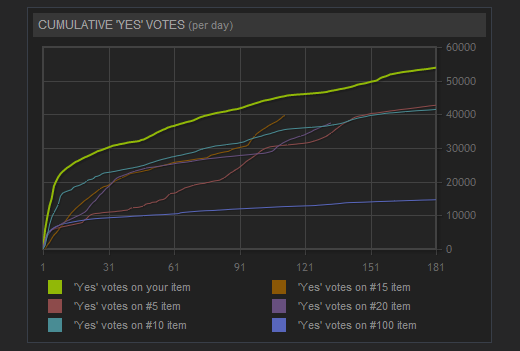 Our first thought was that once we’re in the top 20, it’s just a matter of time until we get picked. But that’s not necessarily true! There are great new games joining Greenlight every day, and some of them shoot straight to the top. So, when we were #11, and the top 10 got greenlit, we were briefly in first place! But sure enough, along came 10 super-hot games that pushed us right back to #11 right before the next batch was picked. This happened over and over, until it seemed like Receiver might never get on Steam.

Finally, we got a surge in votes following an Idle Thumbs podcast about Receiver, and that kept us solidly in the top 10, and we got greenlit in the fifth batch! It’s tempting to say that this final surge is what got Receiver greenlit, just like a tie-breaking point wins a sports game, but ultimately every vote is just as important as any other when the total is what matters. In the end, Receiver got Greenlit by accumulating 54,266 "Yes" votes. Let’s consider this graph of daily votes over time for Receiver: 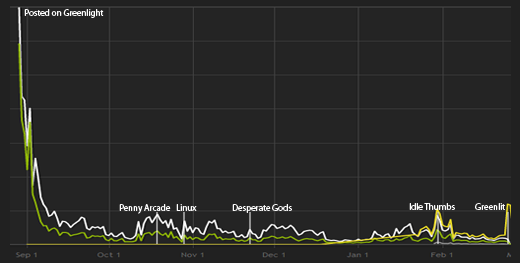 The first thing we see is a massive spike at the very beginning. I suspect this is partly because we got on Greenlight so early, when there were so many users rating games. If you look up Steam Greenlight on Google Trends, you can see that there was a big spike in interest when it was first announced in September 2012, followed by a steep decline. Since only "yes" votes matter, it was a big win to be there for that rush of voters! For the remaining traffic, I don’t have access to any extra analytics data for the Greenlight votes themselves, but I do have access to the stats for "wolfire.com/receiver"! That traffic seems to correlate fairly well with the Greenlight traffic, so I marked some corresponding spikes in the picture above.

There is a pretty significant noise floor of apparently random spikes, from small threads on Reddit, Tigsource, and even TVTropes. However, the first large spike came from a Penny Arcade article about a different game jam, mentioning Receiver as a notable example of what can be done in seven days. Our next significant spike came when we announced Linux support, which got us a lot of traffic from sites like Ubuntu Vibes, and made us a useful example in discussions of the Unity game engine’s Linux support. When we released Desperate Gods, that brought some traffic back to Receiver, because whenever anyone mentioned that game, it made sense to mention our previous work as well.

Finally, the case of the Idle Thumbs podcast is the most interesting, because as an audio stream, it could not drive any direct traffic. However, it did seem to kick off a lot of discussion of the game across the Internet, which manifested as a large spike in traffic from seemingly unrelated viral sources. First there was a spike in Twitter links (blue), then a spike from the SomethingAwful forums (green), and finally, a spike in Google searches (red) along with a video by Giant Bomb. I don’t really know how all these events are related, but they all happened very close together!

To answer the first question we started with, Receiver took so long to get Greenlit because there’s very stiff competition on Greenlight. There are serious contenders joining every day, and only a handful make it through each month, so you can be accumulating thousands of votes, and still see your rank decrease.

To answer the second question, Receiver got Greenlit for several reasons, including help from the faithful Wolfire community that has gathered over the years! Another important factor is that Greenlight voters are starving for novelty, and satiated with polish. Why else would they be spending their time voting on Greenlight instead of playing the latest AAA games? We put a lot of novel ideas in Receiver, and while it wasn’t the most polished game on Greenlight, apparently it was what voters were looking for! Here is the design overview video, for anyone who hasn’t seen it yet:


Be sure to watch it in HD!

Thank you everyone who voted for Receiver on Greenlight, and I hope you enjoy adding it to your Steam library!

Posted in Other Press by David Rosen