This is a blog post adaption of my GDC 2013 Indie Soapbox talk, I hope you like it! I will link to the GDC vault video of it if it becomes publicly available.

Working with technology can be intimidating as an indie developer. Isn’t tech the domain of AAA? How can we compete with their large teams of experienced and talented engineers? Any one of them is probably at least as skilled at programming as we are, and there are so many of them working together!

The secret is that we don’t have to compete with them, because their process adds so much inertia. With such large teams and budgets they have to avoid bottlenecks that might stall the content pipeline, and need to minimize uncertainty about meeting development milestones. The most efficient way to accomplish that is to make sure that the departments can all work perfectly in parallel, with minimal need for communication, so design doesn’t stall tech, and tech doesn’t stall content. This works well from a scheduling and budgeting perspective, but restricts engineers to side-effect-free technology like optimization and iteration.

This approach encourages technical innovation at the periphery of the game design, instead of at the center where it would make the most difference. For example, there has been a lot of brilliant technical innovation in the Halo series that set new benchmarks for visual fidelity. However, the design of Halo is all about shooting aliens in 30-second skirmishes. It’s not about taking in the sights! All of this iteration on rendering technology and art asset creation certainly improves the experience slightly, but not nearly as much as if the technical innovations were closer to the heart of the game design. 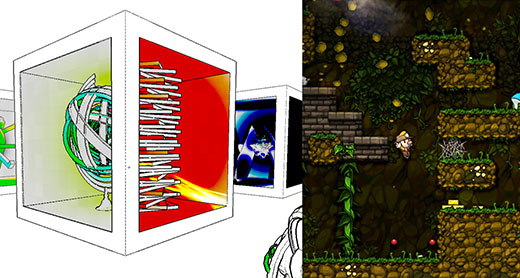 On the other hand, indie games don’t usually have large teams or hard deadlines. We can work more serially, allowing design and technology to inform one another very closely. Antichamber has really clever technical sleight-of-hand to give the impression of non-Euclidean space, and the design is all about exploring that space. Spelunky has solid procedural level creation technology that makes sure that the game is fun to play over and over, and the design is all about mastering the rules of each environment by repeatedly failing and trying again. In both games, the technology is at the very heart of the design, and greatly elevates the player experience.

That’s not to say that graphics technology is worthless, it’s just most effective when the design takes advantage of it. In Journey, the sense of awe, beauty, and immersion is critical to the game design, and it would have been difficult to achieve that without their unique sand and cloth rendering technology (one of the programmers explains their sand tech here and here). If you remove those technologies, the game would not just have a quantitative decrease in visual fidelity, but a major qualitative change as well -- it would not be the same experience at all.

Gamers are always excited to see new technology that is central to design. When Alex Austin posted this video demonstrating physics-based infantry movement in A New Zero, people didn’t really care that it didn’t have very high visual fidelity; they were just excited to see a more embodied approach to movement in a first-person shooter! That’s how it achieved almost 500,000 views on Youtube without any promotion at all. 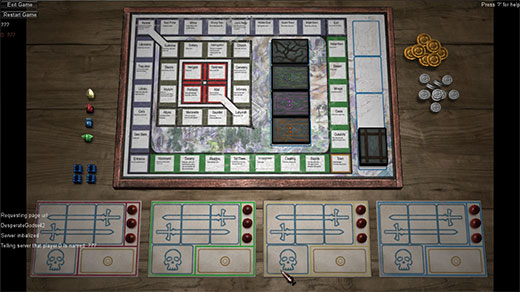 I sometimes encounter the idea that technology is a natural enemy of design -- that the purest form of design is found in board games, using cards, dice and tokens. This doesn’t make sense to me, because those tools are all technology themselves, and they clearly expand the design space instead of restricting it! The dice enable randomness, the tokens enable stored information outside the players’ heads, and the cards enable hidden information. Why shouldn’t digital technology expand the design space in the same way? 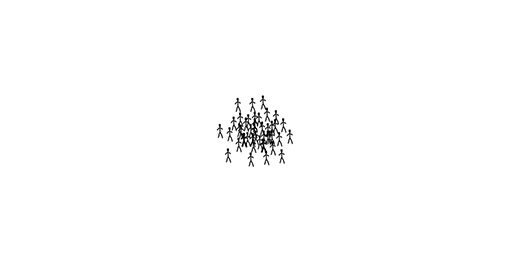 Consider this visualization of the design space, where distance from the center represents use of new technology. At the center is a dense cluster of games that do not rely on much new technology at all -- they focus on design and content using mostly existing technology. It’s certainly possible to create excellent games this way, and there are many examples, but most of them are by design specialists: developers who have created dozens and dozens of games over the years, often in game jams or prototypes. 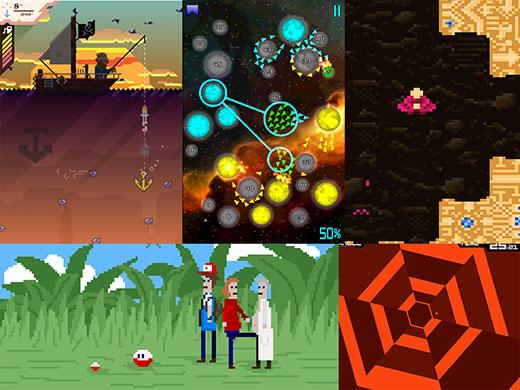 The AAA teams take a different approach. They more or less use an existing design (or, rarely, start a new franchise with a novel design) and then use sequels to compete with one other in a technological arms race, moving outwards from the low-tech cluster in straight lines. There’s one line for third-person cover shooters with regenerating health, one line for open-world games with linear quests, and one line for third-person brawlers with quick time events. 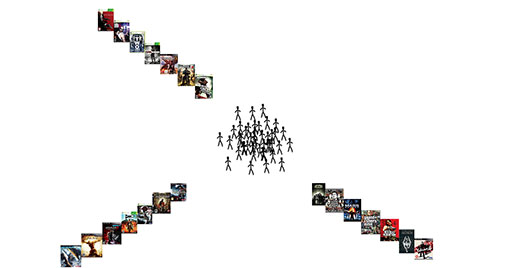 The part of this diagram that I’m interested in is the space between these lines, where there is just emptiness. If you follow these lines partway out, and then take a sharp turn to the left or right, you end up with a game like Amnesia, or Overgrowth, or Natural Selection 2. These games sort of look like a AAA game, but have major differences in their design, so they really have no direct competition. There aren’t really any other asymmetric FPS/RTS hybrids, or any other physics-based tactical martial arts games. 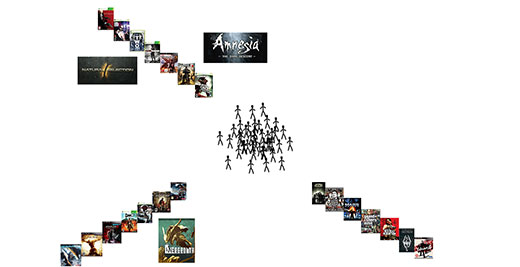 If you take this idea farther, you can end up with something like Minecraft, or Flower, or Proteus: games that are so far from any existing genres that people debate if they are even games at all. It really doesn’t matter though, because gamers love them, and they are very successful by any measure! 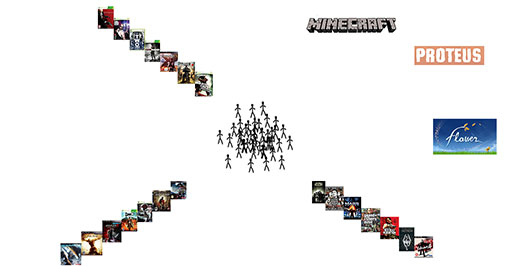 I would like to encourage indie developers to consider using technology to explore all of this unmapped design space. The AAA guys are likely to continue iterating outwards on their straight lines, and there’s really nobody else to turn to: if we don’t explore this space ourselves, it will simply never be explored.