When I talk to aspiring game designers, I often notice some strange behavior. They're evasive about their ideas, almost coy, as if they've stumbled across a secret gold mine. They stamp obtrusive watermarks all over their concept drawings, and ask me to sign NDAs. Otherwise, they believe, someone would certainly steal their idea and unfairly profit from it. They usually want to be the 'idea man' for a team, and find some artists and programmers willing to implement their ideas for a percentage of the profits.

The only explanation for this behavior is the belief that game ideas are extremely valuable in the game industry. This may be true in a limited sense, but nobody is going to steal your idea (or do all the work to implement it) -- they have their own ideas! Most game developers started off as gamers who dreamed of new games that nobody had made yet. They are all full of their own ideas, and would rather implement those than try and steal someone else's. Personally, I have lists of thousands of eclectic game ideas -- far more than I could implement in my lifetime. I will think of a few more right now, with pixel art illustrations by Aubrey. 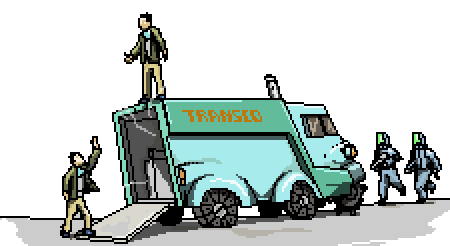 By 2036, teleporters were starting to enter the mainstream after a powerful marketing effort by Transeo. Matthew Cooper was heading to work one morning, as he did every morning. When he entered his office address and pressed the 'teleport' button, an alarm went off. He tried to open the door, but the screen kept flashing 'TELEPORTATION ERROR 354'. He was trapped in the booth until two company representatives pried open the door and carried him roughly into a van. The teleporter had created a copy of him on the other side, but failed to disintegrate him on this side. The technicians now were taking him away to be disintegrated, since this error would be very bad PR! He managed to get a message out to his other self, and they had to work together to save his life, and expose this murderous policy!

In 1888, Hasker was a constable in the police force, investigating a series of grisly prostitute murders. On a bright, moonlit night, he followed a suspect downtown, and watched him enter a secluded brothel. Soon after, unearthly screams cut through the night. Hasker blew his whistle and threw open the door. He stood frozen by the sight within. A salivating monster looked up from a fresh corpse, and bounded for the door -- bowling the constable over in the process! As Hasker picked himself up, he noticed that he had sustained a large scratch across his arm. Over the next few weeks, he started noticing changes in his body... changes he had to learn to control. He struggled to use his new form to catch killers, and not commit murder himself!

The Mystic Healers of the Jade Cross 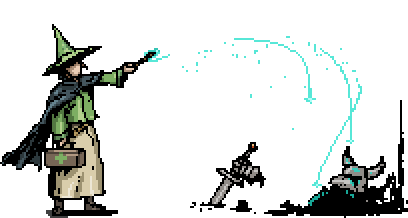 You are a new initiate of the Jade Cross, a group dedicated to treating the grievous wounds inflicted on adventurers by vicious monsters and evil wizards. You can choose from one of three disciplines: the Bonesaws are masters of physical surgery, the Kneelers trade favors with the Gods to bestow holy reparations, and the Weavers use arcane magic to knit flesh from the inside out. As usual, there's a dire threat facing the Land, and as usual, it's up to you to heal broken adventurers until they can finally defeat it! They will get all the credit, but you know you are the true heroes.

The quality of a game is 10% idea, and 90% execution. Let's look at two major games that are both about a time-traveler with a magical sword: Daikatana, and The Legend of Zelda. One of these games was a career-shattering flop, and the other spawned one of the most successful game franchises in history. The game idea and theme are really just spice for the core mechanics. Okami is an excellent game with a totally different idea: the player is the sun goddess Amaterasu incarnated as a wolf, restoring color to the world. However, at its core, it's almost the same game as The Legend of Zelda.

If you want to turn your ideas into games, you need to prove that you can execute them well! You have to learn at least basic programming and artistic skills, and keep making games until they're good. Once others see that you're serious about making games, and have useful skills, they will join your team. Then, finally, you can do justice to your ideas!