Over the years I've played hundreds of games about shooting, and made a few myself, but had never fired a handgun in real life. As a game designer, I was interested to see how the games compared to reality. To find out, John, Phillip, and I went down to a local shooting range. Here is a picture of me about to fire my first shot:

In some respects, it was almost exactly the same as game shooting. The view while aiming a gun was quite similar to using iron sights in a first-person-shooter, and it was disturbingly simple to load a magazine and fire. The gunshot sound and muzzle flash was just as dramatic as depicted in movies and games. Finally, it was just as easy to aim in real life as in most computer games. Here is the target after I fired my first magazine (with ten bullets). 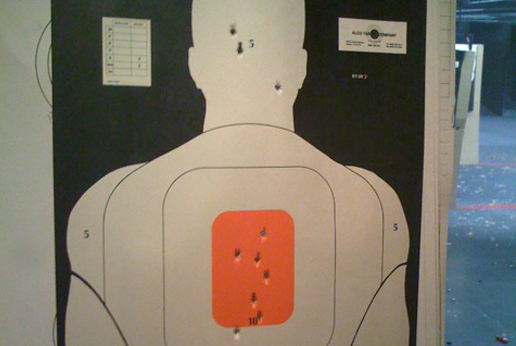 On the other hand, there were a few ways in which it was different from video games. First, pulling a trigger is very different from clicking a mouse. In real life, you have to line the sights with your target, then smoothly depress the trigger until it fires. If you just jerk the trigger suddenly as if clicking a mouse, it will pull the barrel off-target and mess up your aim.

Second, there are a few subtle differences between using game sights and real sights. For example, unless you are shooting point-blank, it is impossible to focus on both the sights and your target at the same time. They are on very different planes, so one of them will always be blurry -- you have to make a trade-off between making sure the gun is straight, and clearly seeing your target. Similarly, it's impossible to hold your hands perfectly still while aiming (easily demonstrated with a laser pointer). There is always a subtle shaking from the corrective movements of your muscles, which gets worse as you keep holding out your arms. This gives us a trade-off between aiming with fresh arms, and taking the time to make sure your aim is perfect. Here is a picture showing the depth of field blur when using iron sights (picture not mine)

Finally, it takes a few minutes to learn to use new guns effectively -- you can't just pick one up off of the ground and use it as effectively as the one you trained with. Each firearm is unique in several ways. First, the iron sights are often calibrated differently, and there is no way to find out how they are calibrated without testing them. Second, different guns have different mechanisms for the magazine release, safety locks, decocking levers, slide locks, and so on, which are not always obvious. Third, each weapon has its own idiosyncrasies. For example, we found that the gun we fired, the Sig Sauer P226, has slightly finicky magazines: if you don't shove them in hard enough, the rounds won't chamber effectively, and the gun won't fire. Here are some examples of guns from the range that look almost identical, but are actually very different: 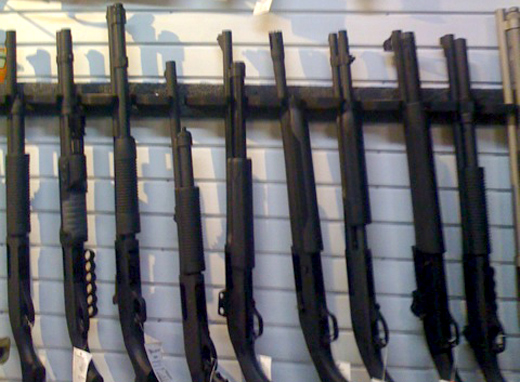 You might ask, "Why do you care about firearms? There are no guns in Overgrowth!" That's true -- recently John and I have also taken some classes in Muay Thai and Brazilian Jiu-Jutsu which are more directly relevant to Overgrowth, but that is for another post! I've made games with guns before (such as Black Shades), and will again, so this kind of experience should be useful. I think that if we are making a game about an activity, it's important to research it and try it for ourselves (if possible, and safe) before trying to capture it in game form. Even if our game is not meant to be realistic, it's important to know what is realistic so we can make informed decisions about which rules to follow and which to break. Do you think trying things in real life is important for creating better video games? What other things should we try that are relevant to Overgrowth?