Hey guys, the results are in from the Lugaru video contest! We will be divvying up our prizes of free Overgrowth and Wolfire t-shirts to the winners soon! 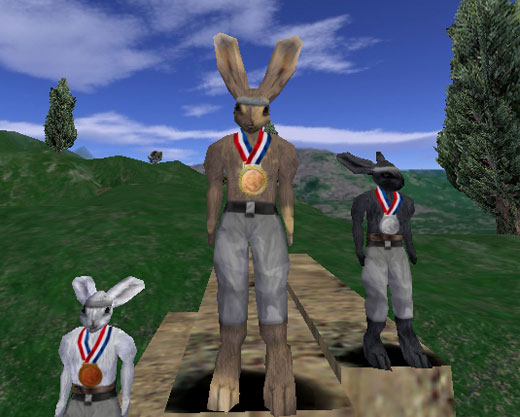 First Runner Up: Lotus Wolf for the lovely composition Kung-Fu Fighting (Lugaru Music Video). Impressive Kung Fu fighting with psychedelic custom skins left only one option for the soundtrack to this awesome video.

Second Runner Up: Tailsfanatic for Lugaru Trailer. This video does an excellent job of weaving together Lugaru's fighting with it's story line. Oh yeah, and just wait until Tailsfanatic breaks it down at the end.

Special awards go to:
Tannim for his multiple creative entries. Tannim made complex mazes out of elements like fire and stone, custom skins and even convinced the Lugaru trees to grow upside down.

Dlrgold for his video: "3 Wolves INSANE" This received a huge amount of Likes, but unfortunately some of them were manufactured by an anonymous party, according to WeGame. We talked to Dlrgold and believe he is innocent. Nonetheless, he will be getting a prize too!

Thanks to everyone who entered! WeGame's Lugaru section now has a ton of awesome videos and screenshots in it and we hope to see many more.

Overgrowth is now in Overgrowth Where are your Preorders Going?