This is a guest post from Aaron Jacobs, one of the masterminds behind the essential SUMLauncher!

Hello! I’m Aaron Jacobs, the programmer for SUMLauncher, which is a tool designed to make management of an Overgrowth preorder as easy as possible. A few days ago we put out an update to SUMLauncher that we’ve been working on for a few months now.


Watch it in HD here

I’ve wanted to get into games programming ever since I started playing around with Halo PC mods in middle school. Sometime around 2008, a friend of mine introduced me to Lugaru, and its then in-development sequel, Lugaru 2. The game that eventually became Overgrowth caught my attention with its open development process. After I began pursuing a computer science degree, I found myself wanting to contribute to the Overgrowth community. A programming project seemed like a natural choice.

Anton Riehl had developed a mod for the main menu that could be used to run community made maps, but using it required downloading and copying in files manually. I wrote a tool that would recursively download all the files and automatically set up Anton’s Menu Mod. 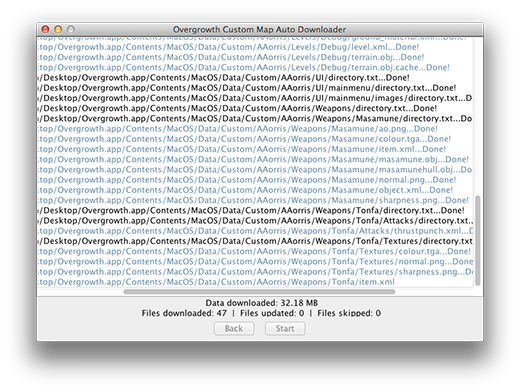 The Custom Map Auto Downloader was extremely simplistic in its design, but it was a good first project for me. It was satisfying to make a tool that people found useful, and I wanted to work on another project. I figured that a tool to automatically download and install updates to the Overgrowth alphas would be a good way to go. While I was working on the initial version of the program, Anton discussed ideas for a more comprehensive set of content tools with several other people (including prominent community member, Johannes). We decided to work together on this idea, now called the SUM OG Utilities (Settings, Updates, and Mods Overgrowth Utilities), which would start with version 1 of what is now called SUMLauncher. 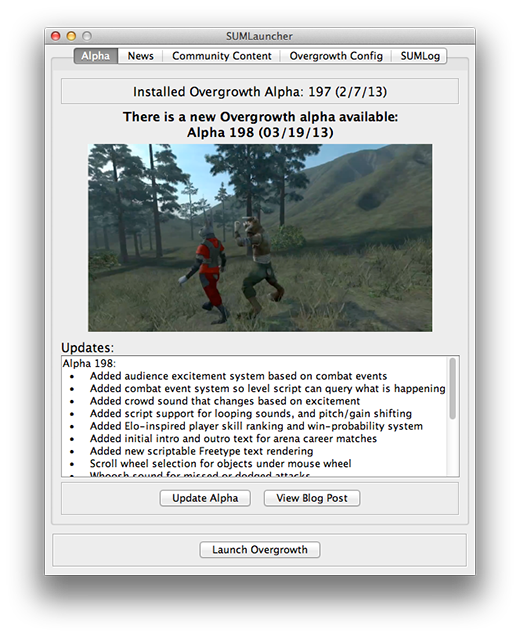