A while ago I did a post called game theory applied to game design. It might be good to take a quick look at that post again if you don't remember it. However, to refresh your memory, my major claims were:

As a result Rock, Paper, Scissor emerged as a clean example of a game where there are no strictly dominant or dominated strategies; all strategies are equally useful in different situations. 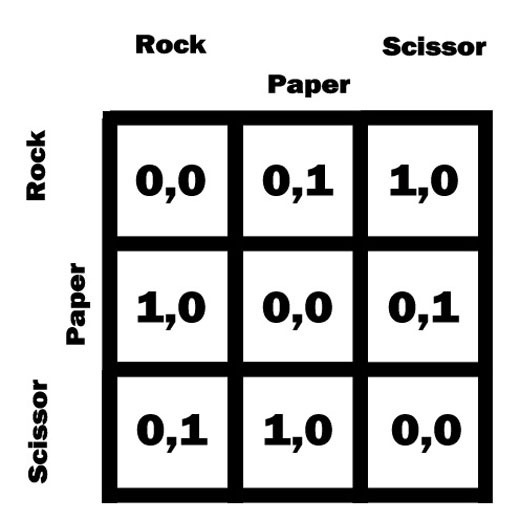 Since we're in the process of making a fighting game, it's interesting to think about how a balanced framework like this might apply directly to Overgrowth.

What if we actually used Rock, Paper, Scissor for our combat framework?

My gut reaction is that Rock, Paper, Scissor is way too simple. In real combat scenarios, fighters have virtually infinite moves at their disposal, so restricting combat to three moves seems rather underwhelming. But can we add more moves to this framework without creating strictly dominant or dominated strategies? Yes! In fact it is trivially easy. Check out this game I made called Rock, Paper, Scissor, Shoe, Ray Gun. 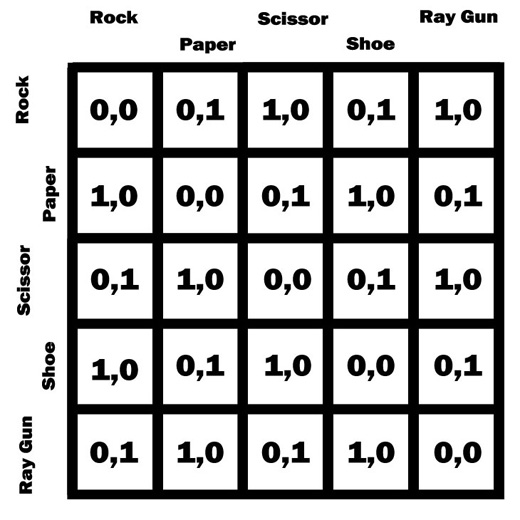 But still that's only 5 moves. If you still want more, check out this new game I came up with called Rock, Paper, Scissor, Shoe, Ray Gun, Hammer, Potato. 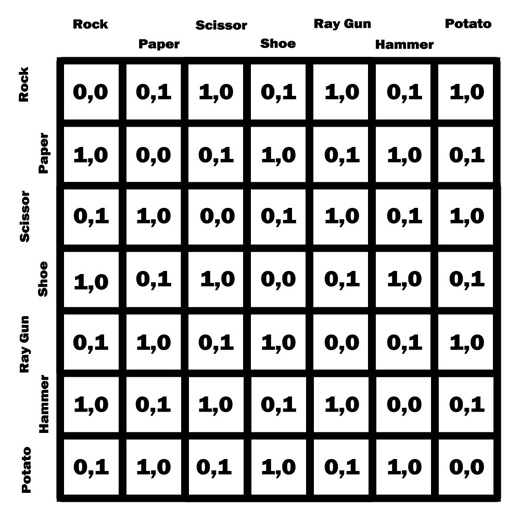 The tyranny of choice

As you can probably see, for any odd number N where N > 1 we can follow this pattern to create a Rock, Paper, Scissor variant with N strategies. But I think there is obviously a problem emerging. What the heck is the intuition supposed to be here for each strategy? Say the enemy plays the strategy "Shoe" and you have 3 seconds to come up with a counter move. Would you remember what to pick or would you have to guess randomly? Games that overwhelm you with potential moves encourage "button mashing".

The tyranny of user input schemes

Even if you can think of the move you want to do, how do you correctly communicate your intentions to the game?

You need some way to translate your controller inputs to fighting moves. Motion controllers may be the future of gaming because they provide the player with an analog mapping of real world moves to virtual moves. However, in light of the fact that Wii Sports Boxing was one of the most frustrating video games experiences of my life, I think it's likely that motion control technology still has a long way to go (maybe Natal or one of those other newfangled devices will be better).

Excluding motion controllers, a character's fighting moves must be generated by arbitrary controls that aren't related to what your character is actually doing. If the control scheme is complicated, trying to perform the key strokes required for the move you have in mind can be a tricky problem.

Giving the player a fighting chance

Use a framework with some intuition

When I chose the names of the strategies in my sample games above, my methods were random. In fact I would argue that even the original Rock, Paper, Scissor game already requires an unintuitive stretch of the imagination. Namely, if you were about to get into a fight, would you arm yourself with a piece of paper or a rock? Yet somehow we manage to train ourselves that paper beats rock.

I propose that the best framework would intuitively convey the interrelation of strategies to people who had never even played before. For example, what if you represented every strategy with an elemental force. You might end up with something like this: 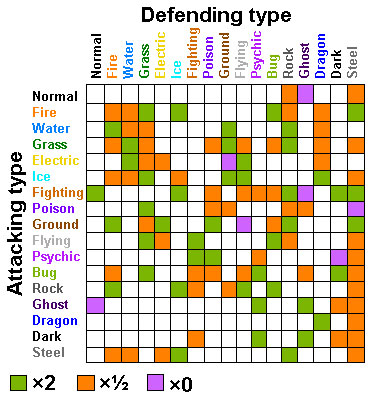 It's still not perfect, but I've never played Pokemon before and it seems quite natural to me that if a fire Pokemon attacks a plant Pokemon, it will get a bonus as will an electricity Pokemon attacking water Pokemon, or water attacking fire. I just can't say the same thing about a shoe with respect to a potato.

Good frameworks allow players to know what the underlying strategy chart is without being shown or having to discover it through excessive trial and error.

Give the player more time

The truth is that humans are fairly slow. The average human response time for an action you are already prepared to perform (clicking the mouse for example) after observing a signal, is about .2 seconds. Don't believe me? Check this game out!


In the real world people can deliver fast analog responses to situations they encounter. In games it's not so simple. (Watch on YouTube)

Now imagine, you have several moves to choose from but you must choose the correct one among them. It's going to take you a lot longer. Feel free to try this more complex game to see what I mean. Unlike Pokemon, which is turn-based so you have all day to think about the chart, real-time combat systems are all about fast decisions.

This creates a bit of a paradox because fast fights look way cooler than slow ones, but fast fights are fundamentally much more difficult to control (fortunately there can be tastefully applied slow-motion Matrix effects). Lugaru fans likely noticed that the main difference between the normal and insane difficulty settings is the game speed.

You can streamline the player's decision tree by forcing them to make choices about the fight. The UFC video game has tons and tons of striking and grappling attacks but since it's not physically possible for fighters to be standing and grappling at the same time, the two move sets are divided. You start the game standing with controls that map to punches and kicks. Then if you decide to perform a takedown, the controls logically switch from standing strikes to grappling techniques and "ground and pound".

Similarly In Lugaru, I can alter my move set from range by choosing to equip a weapon or stick with my fists and feet. Next, by choosing my character's position (whether I run, jump crouch or stand still) I end up effectively determining and reducing my set of eligible attacks. By the time I'm in range to deliver a blow, I'm left with a streamlined choice.

Many mainstream fighting games seem to take the approach that the more moves you can cram in, the better. I have spent countless hours on games like Tekken and Soul Calibur. However, when each character has over 90 unique moves, there really isn't a clean way to process it all. I end up committing to one guy (I usually pick the guy I think looks the coolest, Kilik FTW) and then try to study all his moves in practice mode. I pick about 10 moves that I think will be most effective and then try to memorize the key combo's that generate them.

Then by getting into fights, I can use trial and error to learn what attack beats what (most games are not going to give you a comprehensive chart of how it all fits together and even if they did, you probably wouldn't be able to read it). Slowly it feels like I am getting better, but this solution space is not smooth. Once I learn a few tricks that seem to work initially, I am prone to become set in my ways prematurely. Unlike David, who managed to solve Soul Calibur II with Ivy, I think I often get stuck at local skill maxima without reaching the absolute maximum.

With this in mind, it seems the most powerful way to preserve intuition and eliminate confusion is to be disciplined about how many moves you include. More moves, means more complication which translates to more research and trial and error for the players before they can become proficient.

I think many people have the impression that it's hard to lay down a balanced combat framework with lots of moves. The truth is that this challenge is trivially easy compared to making sure your combat system is intuitive.

We've been talking some internally about Overgrowth's fighting system and while adding an extra attack button to Lugaru's standard combat system could easily allow us to double the number of combat moves, it's not clear whether or not we should. In the end it will probably come down to playtesting but I thought it might be fun to share my initial ramblings with you.

I'd be very interested to hear your thoughts. What do you think about the concepts touched on in this post? What games do you think have had the best (or most intuitive) fighting systems?

Comic update, pages 40-42 Dev chat with Jack Monahan: What is the nature of games?