We spent this evening hanging out at Unknown Worlds' winter party. For those of you that don't know, they are a small development team making a sweet RTS FPS hybrid called Natural Selection 2. We first met them at the San Francisco Postmortems which they host every month and we have since been bouncing ideas off each other about game development.

It's kind of cool because they are in almost the same position we are: making a sequel to their original game, in an engine built from scratch while practicing open development. Below is a picture of just a few of the game developers in attendance tonight. There's no larger version because it contains unrevealed concept art in the background. It's too hot to talk about right now. 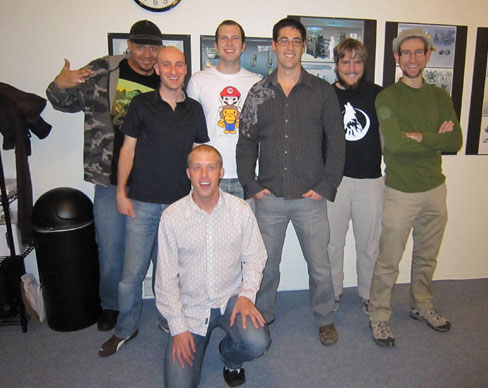 It's always awesome to hang out with other San Francisco game developers! If you haven't heard about Natural Selection 2 yet, you should definitely check out their site. Also, if you are in the area, definitely hang out with us at their monthly post mortem meetup.