You may recall that two weeks ago we added Lugaru HD to the Mac App Store for $9.99 (the same price as on Steam, our own site, and all other distribution channels). You can imagine our surprise when we saw it listed on the Mac store for only $0.99! When we looked into it further, we saw that it was uploaded and sold by someone we had never heard of (using the pseudonym of "iCoder" / "Michael Latour") and had the name "Lugaru" instead of our "Lugaru HD".

When customers search for Lugaru in the Mac app store, this is what they see. As you might expect, this is not good for sales of Lugaru HD.

Lugaru being illegally sold on the Mac App Store

This is a kind of software fraud we've never even heard of: a pirate simply downloading the app and resubmitting it to the same distribution channel at a lower price. We immediately emailed Apple explaining the situation, expecting them to quickly investigate the situation, shut down the fraudulent app, and follow up with us. We started this process a few days ago, and haven't heard back from Apple yet.

While piracy is a fact of life for all game developers, this Mac app store scam is a different beast entirely. Apple is billing the Mac App Store as the place to buy Mac software. It is auto-installed in your dock. It is listed in the Apple menu. We expect pirated copies of games to be available in shady corners of the internet, but not in well-known digital distribution channels with famously long review processes. 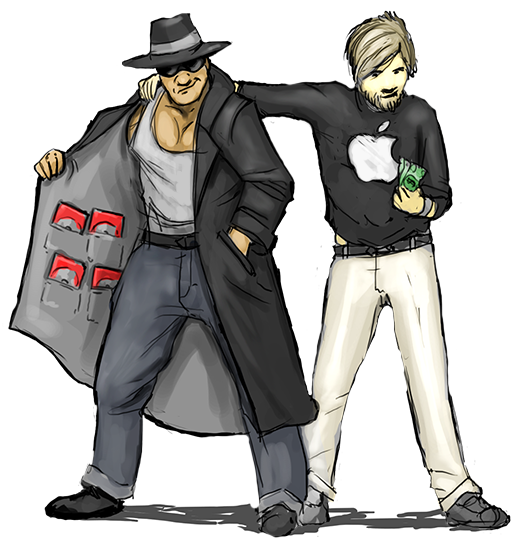 Feel free to use this image with attribution to Wolfire Games

iCoder was very unhelpful in response to our emails (their feedback form doesn't seem to work), but Kotaku managed to get an interesting comment for their article, they responded "we have every legal right to market and sell the software" and, "the license we were granted allows for non-exclusive redistribution of the source code or the compiled product, modified or unmodified, for a fee or free of charge."

According to Kotaku, they are talking about the GPL release of the source code for a number of the Humble Indie Bundle games, namely this post. However, the license made it very clear that the authors retained all rights to the assets, characters, and everything else aside from the code itself. We wrote an article about this explaining how open-source software is not freeware. It's as legal for them to sell Lugaru as it would be for them to sell Quake 3, Marathon, Aquaria, or Arx Fatalis. That is to say, it is completely illegal.

Ignoring the fact that this is obviously a violation of our license, the reason we made the source code available is to give more opportunities for modders and novice programmers to experiment with full game engines and help promote the message of the Humble Bundle. Corrupting this effort for fraudulent financial gain is the worst ethical violation we've ever experienced.

What does this mean for open source games?

Until now, I have been suggesting that developers release the source code to their games. Since the Lugaru source code was released in the Humble Bundle, sales have continued to increase, not decrease. There have been a number of neat results from the source code, including an Amiga port of Lugaru. When I explain to other developers why open sourcing is not scary, I point out that people can already pirate their game -- often on the same day that it is released, or even earlier. How could releasing the source code affect your game in any way but positively?

However, this incident may make developers much less likely to release the source code to their games. Even if Apple takes the counterfeit game down tomorrow, that is theoretically a week of sales down the drain. While Lugaru is a very small title on the App Store, there's no reason why it couldn't happen to bigger ones, and that could represent an enormous loss of revenue. While released source code in no way makes it legal to sell someone else's game, it is apparently enough to make scammers think they could get away with it, and that may be enough to discourage other developers from risking it.