Our friend Edmund McMillen, the prolific game designer responsible for amazing titles like Gish (as seen in David's design tour), Time Fkuc and Super Meat Boy, was admitted to the hospital today for gall bladder surgery. 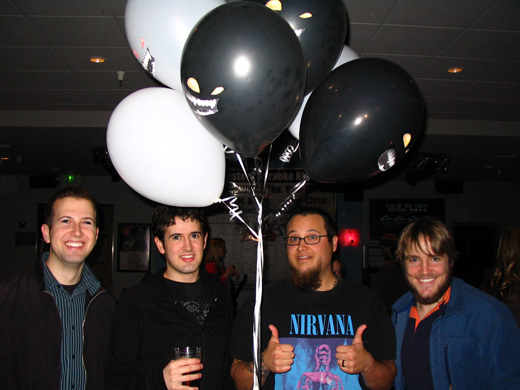 Edmund was one of the first indie developers to reach out to us when we were just starting out, and didn't really know anyone in the industry. This is the photo of us at his 29th birthday party.

The good news is, according to those closest to him, the surgery went just fine. Edmund's gall bladder was more inflamed than expected, but if all goes well, he will be released from the hospital some time tomorrow.

The bad news is that Edmund has no health insurance and because he is a devoted game designer, he has no source of income other than his games. Since he is caught between releases and is going to get walloped by medical bills he might be able to use some assistance. If you're a fan of Ed's games and would like to donate something to help him out, that would be amazing!

Please hold a good thought. I will try to update this post when I hear more. News is trickling in on Edmund's Facebook page and the SuperMeatBoy twitter feed.