In the last year, fans have created many brilliant works of art inspired by Overgrowth, so we've been highlighting some of our favorites here on the blog. Today I'd like to share some wallpapers that Diou posted on page 17 of the fan art thread. Be sure to click on them to see the full-sized versions! 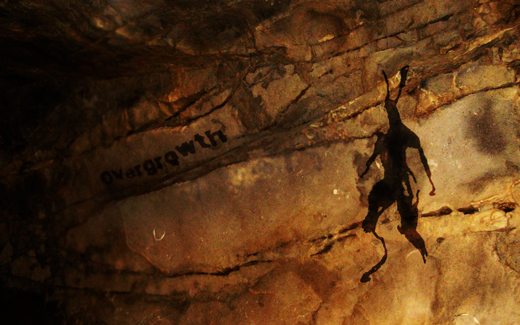 We asked Diou to tell us a little more about his pieces, and he described the making of his cave art in detail:

Step 1: I used an old piece of Lugaru concept art for the pose, and I simply drew around that and took parts away from the form afterwards just using the eraser to whittle it down to a simpler shape and make it look as if it had been painted.

Step 2: I found a nice photo of some caves and chopped a chunk of wall out of that, then put a gradient map layer over the top of it, set as soft light, so that the whole piece could have a relatively small palette of colours, I also messed with contrast and saturation, and the lighting to make it look like it was fire-lit.

Step 3: I changed the colour of the rabbit to a very dark red/brown colour, then set it as an overlay, so that the rock underneath showed through (this made it look like it was on the rock, not just on a picture of the rock).

Step 4: I used impact as the font to begin with then messed around with it until I was pleased with it, and lastly repeated step 3 with the text.

Along similar lines, Diou made this tree-carving wallpaper. However, he didn't reveal his process. I'm guessing a chisel and a large hammer were the tools involved. Or maybe a nano-calibrated bacterial overgrowth ate away at the tree in this perfect formation. Only Diou knows for sure. 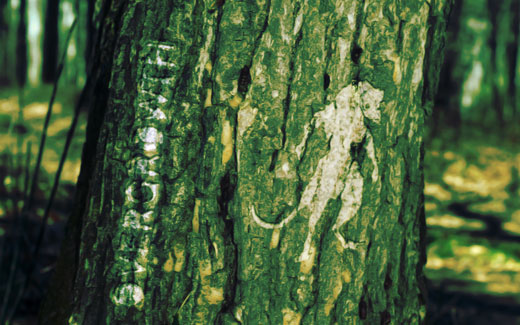 Thanks again for these awesome works of art. With these pieces and Aubrey's official wallpaper, there are quite a few Overgrowth themes available for decorating desktops.

Diou has expressed that of his wallpapers, he likes the cave art the best. Which one do you prefer? Are there any other wallpapers you'd like to see highlighted on the blog?