In the last year, artists have created some brilliant compositions inspired by Overgrowth. Now we're highlighting some of our favorites here on the blog! Below are some character portraits created by Gauss, aka Jack Monahan. As you may recall from Aubrey's Dev Chat, Jack is a talented artist who worked with Aubrey at 8monkey Labs. Remember to click on the pictures to see them at full size.

Some of you may have already seen this wolf which Jack posted on page 14 of the fan art thread:

However, these others are probably new to everyone. Jack envisioned the character below as a rabbit traitor: "He works with the cats, or maybe is just a freelancer, but no longer has any love for his race. He has clipped his own ears off in renunciation, but also takes pleasure in gruesomely collecting the ears of other rabbits he bests in combat." 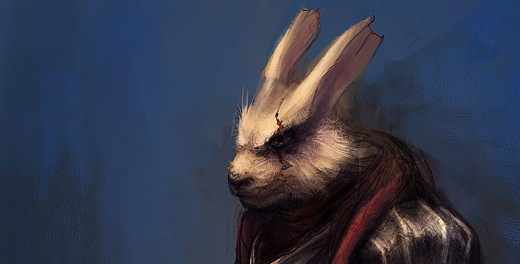 This next piece was more spontaneous: "I had been traveling for about 10 days so I wanted to stretch my legs, so to speak, back in Photoshop. I ended up with this:"

Jack mentioned that this piece took him longer than he had originally anticipated and he decided to catalogue the steps of his workflow in the following chart. I think aspiring artists out there will find this particularly useful! Be sure to enlarge the image to see his detailed descriptions of each stage of the design.

We really appreciate Jack taking the time to offer his interpretations of Overgrowth characters! He does a great job of capturing the dark and fierce mood that we're going for. To see some of his non-Overgrowth-related work, check out his portfolio and level design blog.