This is a post from Mikko Tarmia who is the composer for all of Overgrowth's music.

I run my own small music label called The Sound of Fiction, which focuses on game and movie soundtracks. For me it's a channel to release my own productions, but we also do collaboration projects - like AIKA, a collaboration of four composers, a writer and an illustrator. We are currently working on a special edition album of the Penumbra soundtrack, which will be released later this year.

Selling soundtrack albums is quite a challenging business. This is especially true of computer game soundtracks, since the music files are often already in the game's music folders. With movie soundtracks it's a bit different because there's always some other audio going on simultaneously on top of the music, so it is not as easy to separate. In movies you also usually don't hear entire music tracks - only small excerpts to match with picture editing. Fortunately there is still a market for game soundtracks, and due to downloadable markets, releasing albums is less risky since we don't always have to manufacture CDs. Here is a mockup of what an Overgrowth soundtrack CD might look like, if we made one: 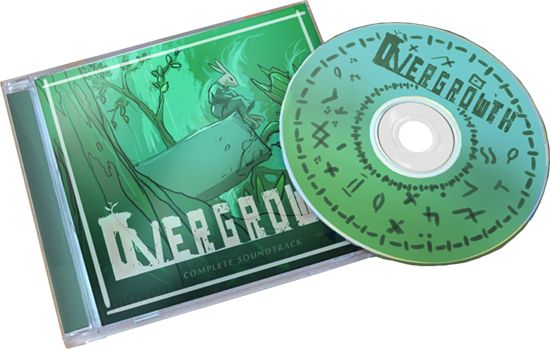 We have discussed making a soundtrack album for Overgrowth, and I'm curious to know if you think it's a good idea. It wouldn't make sense just to sell the music files from the game as an album (as they will likely be available in game folders). For the upcoming Penumbra soundtrack, all the included tracks will be improved soundwise, there will be alternative versions of tracks, and there will be some new tracks exclusively made for the album. Inside its booklet we also give fans a further insight into Penumbra's story. All of these extras make the album more interesting and worth buying.

Now, for the Overgrowth album, what kind of extras could we include (extended/new music tracks, concept art, stories, minigame etc.)? Should it be a CD album, a downloadable package, or both? Let us know!