Mainstream video games these days are a huge investment. It's hard to put $60 million on the line for anything but a sure bet. So big video game companies tend to be risk averse, sticking with tried and true genres like the chain smoking space marine FPS and the steampunk fantasy RPG.

But, all that pressure to conform has, conveniently enough, left a niche for those who don't, and there is a growing community around experimental games. One strong promoter, The Experimental Gameplay Project, holds monthly competitions to build an innovative game in no more than seven days. Similarly motivated, The Experimental Gameplay Workshop holds an annual meeting to showcase and discuss unconventional new games. And, there are also plenty of great game jams, at which developers get together to quickly prototype new ideas.

Since the big companies are so mired in financial obligation and trade secrecy, it tends to be Indies who are spearheading public experimentation. Here are some experimental indie titles. I think they give a good flavor of what experimental games are all about... and they are also just plain awesome. Click on the images to play the games! 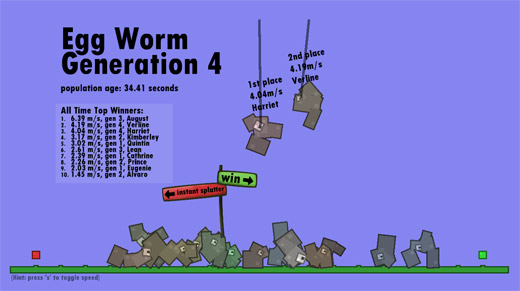 'Experiment' sounds like science, so let's start with an entry that makes a game out of a scientific research paper. Egg Worm Generator was Kyle Gabler's entry for last month's Experimental Gameplay Project competition. In this game, you watch as block creatures wriggle, bounce, and claw down the screen toward a finish line. The first few to arrive spawn a second generation of critters, and like so, the creatures evolve, each new generation getting faster and faster. Kyle planned to let the player shoot at the creatures as they race toward safety, but didn't finish in time. Still, the game idea is clear: a race against an evolving enemy.

The brilliance of this idea is how crisply it falls out of a very specific landmark in AI research: Karl Sims' Evolved Virtual Creatures. Kyle once said the best games to come out of game jams are those "that introduce one new concept to the world of gaming as fast and as clear as possible." Egg Worm Generator does exactly this with the concept of Evolved-Virtual-Movement-gameplay. (Bonus fact: Our very own David Rosen actually experimented with this same idea in 3D in a tech demo from a few years back!) 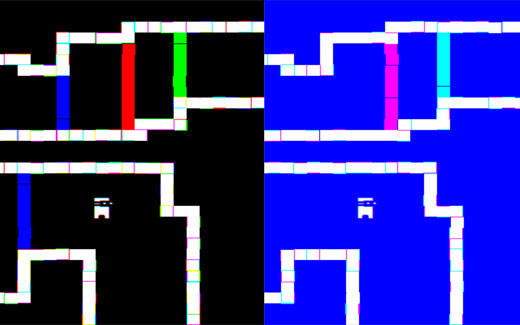 How does one come up with ideas for experimentation? One way is to do what Kyle did: find a piece of 'serious' work and make it into a game. Virtual Silence, by Vertanen, shows another way.

In this game, you work your way through a classic, pixelated maze. The graphics are simple and level layout is standard. There's just one twist: pressing 'z' overlays a solid color - red, green, or blue - on the screen. Now the game appears as if you just put on a pair of those red and blue glasses people sometimes use for 3D movies. Apply the red filter and red objects disappear. Switch to blue and the red objects return while the blue objects leave. The game's puzzles involve using these filters to pass through colored barriers and to avoid colored dangers.

Virtual Silence innovates by finding something we take for granted - that graphical appearance can't change game physics - and turning it on its head. 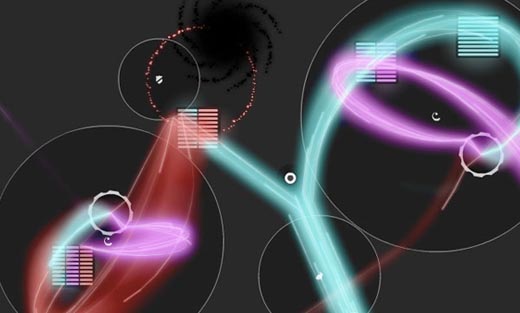 Yet another way to experiment is to find an underused domain of interactivity and toy with it. Auditorium, by Dain Saint and William Stallwood, is a beautiful puzzle game in which you direct light particles to activate an orchestra of sounds. Playing with sounds is becoming a more popular theme in games these days (for example Audiosurf and even mainstream titles like Rockband), but audio is still only superficially incorporated in most titles.

Experimental games are, as their name suggests, experiments. They work a lot like science experiments. You take a single variable, and, in a contained, isolated environment, you tweak it; tweak it in a way it's never been tweaked before. Then you compare the results to a control group (mainstream games) and see how your experimental manipulation changed things. Record the results and move on. If you are lucky, a few of your experiments will reveal something truly new and extraordinary. These experiments are the ones you should probably re-label as prototypes. A few years back, through the Experimental Gameplay Project, Kyle Gabler made a four day entry called Tower of Goo. A few years on, and the prototype has turned into a finished game: the massively successful World of Goo!

What do you guys think about the experimental game approach? What are some of the coolest experimental or innovative games you've come across?