This is a post from Mikko Tarmia who is the composer for all of Overgrowth's music.

Rise of the Virtual Orchestra

Most of the orchestral music used in games, movies, and advertisements is now created with virtual orchestras -- computers and software samplers have made it possible for anyone to perform and record orchestral music without leaving home. This saves us the time and money we would have spent hiring live players, renting concert halls and using expensive recording services.

However, this also means that composing like Mozart is no longer enough. We also need music production skills -- the software tricks that make it sound real. Our ultimate goal is to fool the audience into thinking that our music was done with live players, and that just isn't easy to do. We can get pretty close, but we can't quite match the sound of live orchestras with today's technology.

My home studio is a small, acoustically-treated room (see picture below). I have a Mac running Logic Pro sequencing software and a PC running the Gigastudio sampler -- this helps share the overall processing load (the Mac is running all kinds of other sample libraries as well). There's some external hardware: a few synthesizers and some processing equipment. The Alesis QS8 is my only keyboard at the moment. 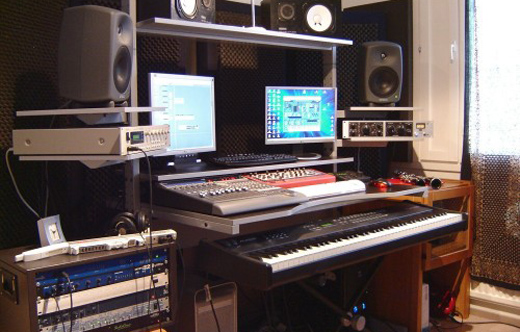 One interesting piece of my setup is the Akai EWI wind controller with an analog synth module. It's a bit tricky to play, but it can emulate a wind instrument's playing style. I can hook it up with a sampler and by driving the sound through the module's filter circuitry it makes the playing sound more real. I also have a small arsenal of live instruments, and some equipment to record them.

Orchestral sample libraries usually have multiple samples for every single note of every instrument, with different dynamic levels and articulations. This is enough for basic orchestration, but I usually find them lacking all kinds of things -- putting some limitations on the music. However, by using samples from a few different orchestral sample libraries I'm able to achieve a richer and more unique sound than if I used just one library. I hope you will hear the difference when you play Overgrowth!

Since there are some music makers among Overgrowth fans, it would be interesting to hear your thoughts about virtual orchestras! Do you know any tricks to help them sound more realistic?