As some of you know I've been in LA this week hanging out at E3. Having, never attended E3 before, I wasn't sure what to expect. As you may have seen on the Overgrowth Facebook page, I started Tuesday morning by storming in through the front with bagpipes and a Wolfire cape. However, the E3 administrators soon determined that I was not a registered floor model and asked that I put the pipes and cape away. Compared to the real E3 floor models I wasn't much to look at anyway. Below is the proof:

This was the E3 medical staff ready to go with band aid stickers to promote the game Trauma Team: 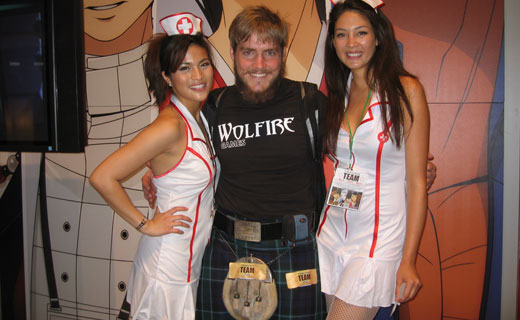 These two were modeling for the new Ninja Gaiden:

This woman was dressed up like the main character of Bayonetta (and mentioned that she liked my kilt :) ): 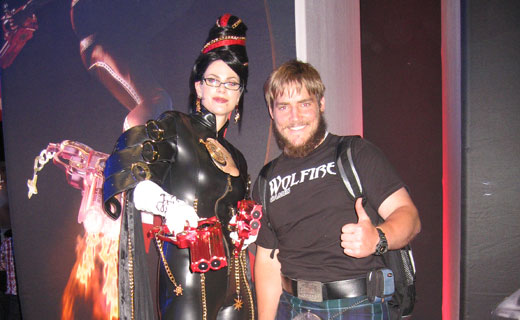 This woman was representing Everquest II: 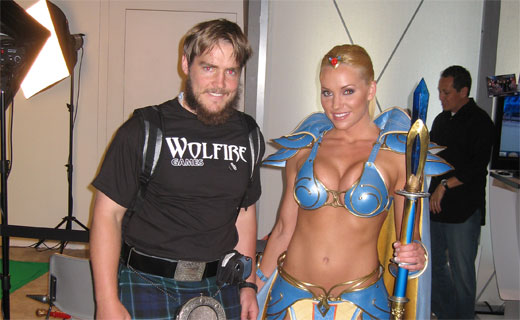 Finally I couldn't help but get my picture taken with the G4 girls because their skirts were a good match with my kilt: 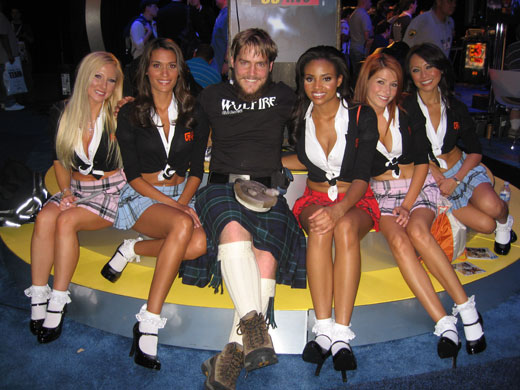 I had a chance to interview some of the E3 models (they wished to remain anonymous) and here's what I learned:

E3 models definitely prefer the term "model" over "booth babe" because it is more accurate and professional sounding. The women work through modeling agencies and the booths at E3 represent just a small fraction of the modeling work they do.

The E3 models tend to like video games but that has no bearing on what characters they decide to represent.

People at E3 are generally very polite and go so far as to ask for permission before taking pictures. However, those "witty" conversation starters we come up with like "How many people have you had to hit with your battle axe today?" get asked hundreds of times over the course of the conference and yet the models are still kind enough to humor everyone as if they've come up with something unique and intelligent to say.

I noticed that standing up all day for three days in a row is pretty tiring. So I asked the models what it was like to spend the whole day not only on their feet, but wearing heels. "It sucks!" they declared without hesitation. Their exhaustion was further emphasized when they said they would not be searching for E3 after-parties once the show was over, but would be going to sleep instead.

Apparently, using scantily clad models at E3 to promote games is a somewhat controversial. Just 3 years ago models were banned altogether. I won't declare myself an expert on the morality of the subject but I will say that I have a lot of respect for the E3 models and found it very interesting to hear their perspective on the show.

What do you guys think about using scantily clad models to promote products?