1. Imbalance makes for a good story

Movie and video game characters seem to be getting more and more uniformly powerful these days. I liked Wolverine when he was just a badass fighter, who could heal quickly from flesh wounds and had sharp metal claws. But perhaps that's not cool enough for our era of Abercrombie and Fitch Spartans and Jedi infantry. Now, Wolverine is immune to all damage except decapitation, and his blades repel energy bolts powerful enough to slice through an entire cooling tower of a nuclear power plant. He fights enemies who are just like him, super-powered and more or less invincible.

The heart of any good story is about overcoming adversity. But when every character is equally powerful, there's no real adversity to overcome. Everyone is already at the top. It's only when the hero starts out at the bottom, as the underdog, that we begin to see a meaningful quest. The greater the imbalance at the start, the better we feel when the hero prevails in the end.

The original Star Wars trilogy understood this and used imbalance to great effect. These movies are pretty much one highly imbalanced fight after another: Death Star 1, Vader versus Obi-Wan, Hoth, the asteroid chase, Luke versus Vader, Endor, Death Star 2, Luke versus the Emperor. Interestingly, I can't think of a single fight in the prequel trilogy that is as wonderfully imbalanced as those in the original (the closest is maybe Naboo versus the Trade Federation, but the droid army was too clowny for me to buy it as a convincing threat).

Beating a stronger opponent requires clever tactics. You cant just rely on obvious moves. You have to find the enemys few weaknesses and exploit them. Such tactics often lead to interesting fights. For example, in this UFC fight, Royce Gracie, at 180 pounds, manages to submit a 486 pound sumo wrestler champion by using his whole body as a vice on the wrestler's arm.

Character variety is very important in fighting games. This is especially true in competitive games like Soulcalibur. Each player should be able to find a character he or she likes. Some players will want to be the skinny ninja girl. Others will want to be the hulking hammer demon. This sort of variety is great on its own. But it conflicts with another design goal in competitive fighting games: giving each player an equal chance. When game developers try to perfectly equate the fighting ability of such varied characters, ridiculous matchups often ensue: 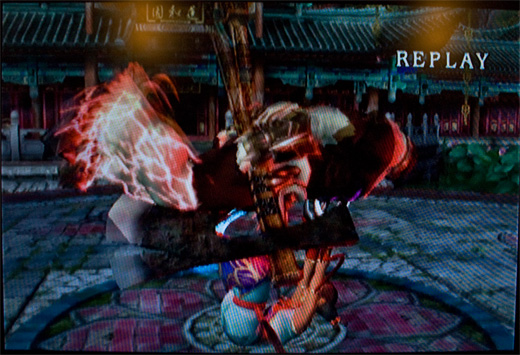 Here we have Talim versus Astaroth. Having rolled onto her back, Talim now has the leverage to toss an Astaroth over her head.

The unfortunate reality is real fights are rarely fair. The slender youth will never survive a grapple with the towering monster. The sword master ninja won't really stand a chance in a standoff against the guy with a gun.

But, this doesn't mean more powerful opponents can never be bested in realistic ways. The Return of the King pits a hobbit and a princess against a witch king and his dragon mount. Though it does push credulity to some degree, this scene kept me immersed. The enemy remains imposing since he is only defeated when, in his arrogance, he is taken by surprise.

The original Star Wars trilogy had imbalance mastered. The prequels pretty much left it out. I wonder how the latest Star Wars games are faring:

I watched this with David, and I think his response was right on: "It's not as cool when everyone's a Jedi." Syndrome, from The Incredibles had a similar insight: "When everyone's super... no one will be." Imbalance keeps things spicy by constantly applying contrast. Clumsy balancing ends up making everything look gray.

So, how can we incorporate the good aspects of imbalance into Overgrowth? Luckily, we already have a great context for imbalanced fights: You are a rabbit who takes on much bigger and more ferocious creatures. I think this premise added a lot of drama to the fights in Lugaru. How can we push this even further? One thing we were thinking about is making the wolves larger and more monstrous than in Lugaru. We have also thought about including enemies that are nearly impossible to beat head on, and but can be defeated with more unusual tactics.

What do you guys think about imbalance in game design? And what about good old balance? How can we, um, balance imbalance and balance?