This weekend, we'll be blogging from Sierra City, CA! We've all gone up together for some 'team building exercises'. Just kidding. Actually it's for fun. One of the things we've been doing is playing Magic: The Gathering. I've been playing Magic on and off since it first became popular around 1995. Each time I come back to the cards, I think it'll probably just be more of the same. But the game continually surprises me. The designers keep finding new ways to twist and recombine old mechanics, and keep introducing new abilities and rule variations that revitalize the game. I figure there must be some good design lessons from Magic that we can apply to Overgrowth. Here are three of the design choices that I think have made Magic great.

The world of Magic is broken up into five elemental colors. Each color has its own temperament and suggests its own gameplay style. For example, green focuses on large creatures and spells that cover the land with overgrowth: 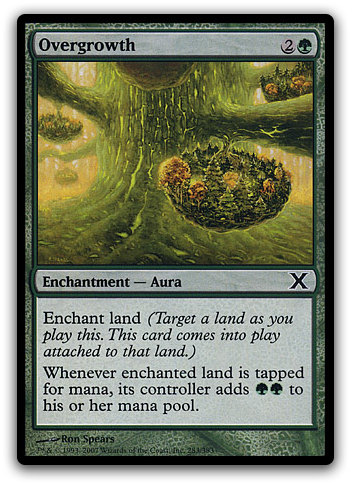 Red, on the other hand, is all about fire, speed, and powerful damage spells. The colors are carefully maintained to be distinct and balanced. Each color synergizes with two allied colors and antagonizes with two enemy colors. The colors provide a simple structure that organizes the whole world of Magic.

This type of organization - high level, intuitive, and distinct separation of classes - is characteristic of a lot of great games and stories. The Lord of the Rings primarily concerns five archetypal races: humans, dwarves, elves, hobbits, and orcs. Starcraft includes three quite distinct species: the Zerg, Protoss, and Terran. The classes in each of these cases, like the colors of magic, occupy opposing points on a circle of possibilities: 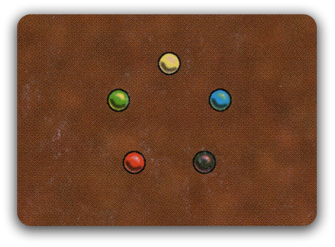 Image on the back of every Magic card.

In Overgrowth, we already have an organization system quite like this: Rabbits, Wolves, Dogs, Cats, and Rats form a pentagram of dispositions. Here's what these species might look like if they were Magic cards:

What do you guys think about this kind of organization scheme? We will talk more about distinctions between the Overgrowth species a bit later.

In the early days, many magic cards were fairly useless in competitive play. This meant a lot of casual players ended up with weak cards and decks that sputtered along, barely able to make any non-trivial plays. To get a deck really roaring required buying a ton of cards. Plain, weak cards like Mons's Goblin Raiders and Merfolk of the Pearl Trident perhaps made bombs like Serra Angel and Shivan Dragon look more epic, but they diluted the fun of the rest of the game.

Old cards (shown above) had inconsistent coolness. New cards are all at least kind of interesting.

These days, Magic prints very few dull cards. Pretty much every card can find a useful place in the right deck, and even the really bad cards tend to have interesting or unusual mechanics that at least make them fun to consider. This is not just because useless cards are rarely printed anymore; it's also because each card is designed to have more synergy with other cards in its set.

I think this evolution has made Magic a lot more accessible. Whereas in the past I struggled to make workable decks out of hundreds of cards, now I can pick up a random pack of 75 and immediately pick half of them to form a pretty powerful deck.

I think we can apply this principle more or less directly to Overgrowth. For example, it may seem cool at first to have rats that can be totally dominated by the other species, but I think it will be more interesting in the end for the rats to have their own redeeming skill set. Giving every card, species, weapon, etc a viable use is a way of making the 'balanced' rock-paper-scissors gameplay that players tend to enjoy.

Magic somehow manages to tell compelling stories directly through the cards. Sure, there are Magic novels and other expanded universe media, but these only add to an already flavorful world. The cards accomplish this storytelling through three primary outlets. First, many cards have flavor text, which are little sayings, character quotes, and observations at the bottoms of the cards. Second, card art depicts a consistent and specific world. Each set of Magic cards takes place in a unique environment with a unique story. Artists are given detailed style guides and you can get a great feel for what is going on just by looking at the illustrations. Third, the actual card mechanics are carefully thought out to reflect the setting. For example, in the Ravnica set's story, there are four competing guilds. Each guild has its own special mechanics and design tendencies. For example, the Boros guild focuses on fast, small creatures whereas the Selesnya guild concentrates on slower but bigger beasts.

'Mana producing artifacts' for three of the Ravnica guilds.

Magic's flavoring is a great example of implicit storytelling. In most games, whether on paper or on screen, players don't want to be bogged down with lots of reading or force fed stories. For example, Metal Gear Solid 4 got a lot of criticism for being half cutscenes. It's important to keep story from interfering with gameplay.

How can we apply Magic's success in this regard to Overgrowth? One really direct way would be to give inventory items some associated flavor text. In editor mode this would be easy - the flavor text would just pop up in a box in the item browser. In the actual game it'd be a bit trickier. Maybe we could give items inscriptions, or they could be found with notes or verbal descriptions, or the flavor text could be memories your character has about the items?

Do any of you guys play Magic? If so, what aspects of its design to you find notable? Do you think collectible card game design is applicable to video games?