David and I are twin brothers, and our family has a cabin in Sierra City. About 12 years ago, when we were 10 years old, we were wandering around town and noticed an unusual young dog. 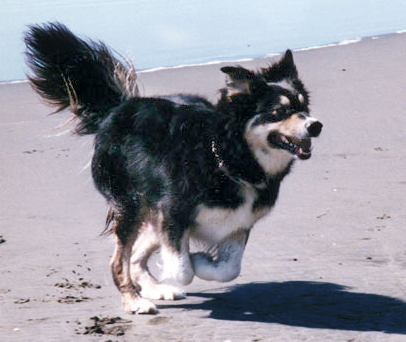 He started to follow us around the neighborhood. He didn't have a collar but we assumed that he belonged to one of the neighbors, and played with him whenever he showed up. We taught him a number of cool tricks -- his best trick was sliding down the slide in the playground (climbing the steps was the hardest part to learn).

Every time David and I left the cabin and went for a walk, the dog would soon appear and follow us. He went everywhere with us. However, after a couple of weeks, we had to go back home to San Francisco. As we left, he ran after the car for miles, but eventually shrank to a distant speck and disappeared around a bend.

When we came back to Sierra City a few weeks later, we heard reports from the locals that a strange dog had been howling on our porch for days after we left. 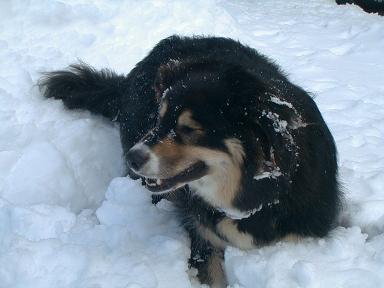 David and I looked for him all over the neighborhood, but couldn't find him. We were about to give up, when we noticed a number of "I found a missing dog" flyers pinned up with a description that clearly matched our new friend.

We called the number and went to check up on him. He was really happy to see us! Since he didn't have a home, we decided to adopt him.

We couldn't just keep calling him 'dog', so we decided to pick a name. Our mom wanted to call him Jacques. David and I came up with Wolfenstein, or Wolfie for short. He responded much more favorably to Wolfie than to Jacques, so that is what we named him.

When David was thinking of a name for his video game company, Wolfie sprang to mind. If you add an 'r' you get Wolfire. Wolves are cool, and so is fire, so why not Wolfire?

When we started selling Wolfire T-Shirts, we soon found out that most of our customers were named Mr. or Mrs. Wolfire, and got a kick out of seeing a logo that is literally a wolf made out of fire. 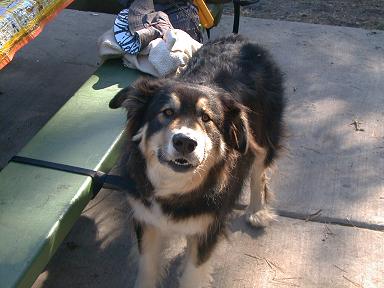 Wolfie is about 13 now (we assumed he was about a year old when we found him), and is still alive and well, although he has slowed down a little. We don't know how much longer he will be around -- but his name will always live on in Wolfire.

Posted in by Jeffrey Rosen