Some of you noticed how Black Shades iPhone recently disappeared from the App Store. This was due to our recent switch from David's private iPhone developer account over to Wolfire's company account. We thought the switch would be instantaneous but four confusing days later, you can grab BSi on the App Store again. You can still catch it at 99 cents but you should hurry because we plan to raise the price soon. 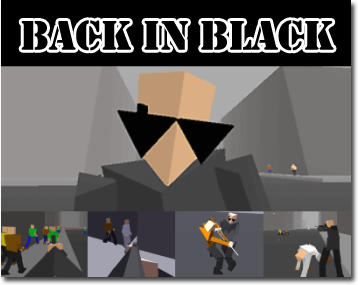 It's no secret that Wolfire's long history of making Mac games stems from the fact that we are big believers in Apple and really appreciate the care and attention they put into most of their products and services. However, when it comes to interacting with the iPhone App Store via iTunes Connect things are surprisingly disorganized.

The biggest problem stems from the fact that the iTunes Connect UI is not all that intuitive and there doesn't seem to be any real instruction for setting up or modifying your account. To help you out, Apple lists a phone number and various generic emails you can contact for support. Unfortunately, the phone operators don't seem to be able to access your account, check your status or provide instruction on what you need to do to finalize an application. Instead they usually direct you to one of the generic email addresses.

Then it usually takes at least a day to get an email response (bad news if you have a live app waiting) and any given responder can only help you with the small chunks of the process directly related to his department. Other times you just won't get a response.

Additionally, the iTunes UI is designed to provide you with friendly green check marks that are quick to report that you're all done with the process on your end when there may actually be bonus hidden steps further down the road. With no one there to guide you and say "Hey, here's what we're waiting on." it seems dangerously easy to get lost in purgatory.

The moral of the story: Set up your account before your app goes live. Unfortunately, we never had this luxury because a release date glitch made BSi think that it was supposed to launch on February 13th. It was February 26th when BSi cleared inspection from Apple, and the app not only fired without warning but also seems to have had no chance of landing on the "What's New" section of the App Store because on launch day it was already considered to be two weeks old.

One final grievance involves promo codes. If you want to get exposure to iPhone users, it's a good idea to ask reviewers to look at your app. Standard etiquette suggests you should offer a promo code to reviewers so that they can download your app for free. Apps can be sold internationally and we have some good friends at Games4Mac.de who wanted to review BSi. To our dismay we found out that they have German iTunes accounts and we can only generate promo codes for U.S. accounts. Why dost Apple mock us so? Shouldn't they be encouraging us to promote our apps?

It was surprising to see that Apple has trouble living up to its usual high standards with respect to services for iPhone developers. Perhaps if Apple maintained some live chat support, and listened to user feedback they could eliminate some of these inefficiencies :). That's enough ranting from me. The important thing is that BSi is no longer stuck in "no man's land" and we've survived a crash course education on launching iPhone apps that should make us pretty savvy for any future projects.

Are there any other iPhone developers who have had fun experiences with the App Store? How do you guys feel about the App Store from the consumer perspective?

Posted in Business by John Graham