Continuing on my series, this week I'll talk about making concepts.

I mentioned the idea of working backwards through a design starting with what you want to accomplish. This is harder for some things than others. For example, with weapons or characters that are going to be a key part of the gameplay, it is important to keep in mind how each part will work with the gameplay systems while keeping everything else in mind too.

Lets say I want to make a new weapon. I want the weapon to fit in with the world and seem believable so I have to ask how does your character earn it in the game? How does it fit in the with the attacks and existing weapons? How was it made and who made it? I like to think about this kind of stuff all the time.

What if you get the weapon by beating a boss character? What if the weapon can break through other attacks, and the weapon can't be disarmed? It would probably be something heavy like a mace or a hammer. 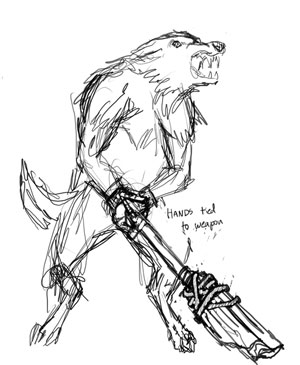 Often I will draw only the most simple scribble before I start modeling something. Sometimes it is easier to work out the details in 3D, but for the sake of this blog post I made this sketch. I had the idea of a wolf slave forced to fight in the arena. Wolves refuse to use weapons or technology, but his dog captors send him to battle with his claws tied to a massive club because they find it amusing. It isn't hard to come up with these details once you have the game world fleshed out in your mind.

So looking at this design, we can see why the weapon can't be disarmed, and why it can break through attacks. We can see that the weapon is made from rope, wood and stone from a ruin-- all things you will have seen in the game. The weapon is primitive because it was probably made by the captors of the wolf instead of by an expert weapon smith for battle.

Since concepts are usually drawn, I wanted to take a little bit of time to touch on the art and what tools I use. For years I have been using Photoshop and a tablet for my professional work. If you are learning you don't need anything more than a paper and pencil, but if you feel like you are ready to move on to digital art, having good tools is critical. Right now I am using Adobe Photoshop CS2 and a Wacom Cintiq 12WX for my tablet. I only got the Cintiq recently. before that I had a Wacom Intuos 2 that I bought used.

I could go through each step of what I do, but there are already great tutorials on the internet that explain it better than I can. Also, it is important to remember that you don't really have to draw anything if you already know all the details of what you want to make.

Next week I will start to make the 3D model to put in the game! What do you guys think of this concept?

Why game designers should learn to draw Black Shades iPhone