Wolfire has a problem. I think a lot of other video game communities have this problem too. I'd like to tackle it head on: we don't really have any girls in our online community. They do exist, but let's just say that the ratio is approaching zero.

For a long time, I have written this off as simply "girls don't like Lugaru". However, since we started an Overgrowth Facebook Page, we can actually see some really rough demographics: 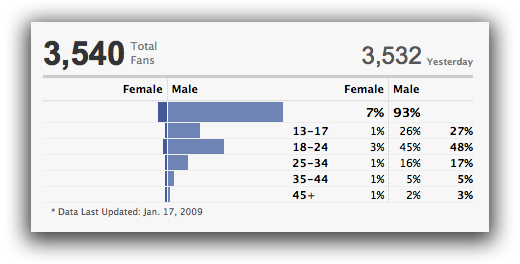 This 7% figure is a little startling; we expected more like 0%! This called for more research. Whenever someone purchases Lugaru, we ask for their name to generate a unique serial number. I ran this database through an international name analyzer I found. The results are pretty crazy: 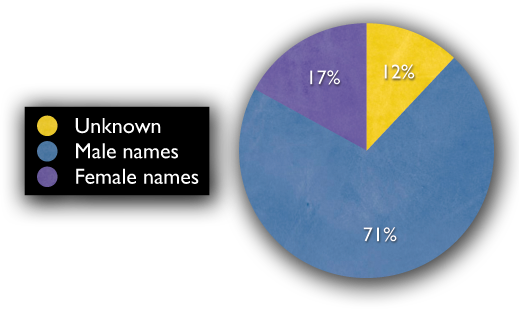 Granted, some of these female names are probably moms who purchased the game for their son and put their own name in the serial number field. Our data is pretty dubious. However, combined with the Facebook data, this is pretty compelling evidence that some girls do play Lugaru.

Unfortunately, on the forums, it is extraordinary to see a girl. Our IRC channel is still in its infancy, but I have never seen a girl on the channel.

So why don't girls who play Lugaru get involved with the community?

I'm just a humble engineer, not a sociologist, but I have a few theories.

Anti-girl feedback loop
It's inaccurate to say there are no girls on the forum. A more accurate statement is that there are no girls who stay for longer than a few days. For instance, there is a legendary thread in the secret preorder forum where a girl posted about how excited she was to join the community, alpha test, etc. The title was ":squeals with joy: Im sooo excited!! ^,...,^" Anyways, 54 posts later, filled with a lot of weird stuff, she is missing in action.

Sadly, this happens a lot.

Poor seeding
So the huge quantity of guys on the forum seem to be scaring away girls. But how did it get this way in the first place? Well, Lugaru started its life on the 99% male idevgames.com developer forum, so the community was seeded with guys. All the beta testers were guys, and therefore the early active forum members were all guys. It's a self fulfilling prophecy.

Forum members are hardcore
You have to be pretty serious to participate on online forums. It's stereotypical, but maybe it's more of a guy thing to dive into a game so far that you begin to contribute to its community or work on its wiki. Girls are more casual?

I am most interesting from hearing from girls themselves in the comments and possible solutions to break out of the old boys club. What can we do to help?