At Wolfire, we don't take breaks for pesky occasions like Christmas or Hanukkah. One of the advantages we have over the big guys is our insane work ethic. Continuing our fine tradition of weekly alphas and open development, I bring you Overgrowth Alpha 7!

Following right on the tail of our unexpectedly hot post about why you should support Mac OS X, we're eating our own dog food.

The big news this week is that THE UI WORKS ON OS X. We are using Google Chrome for all sorts of hot stuff in Overgrowth, including the user interface. I'll explain this in more detail later, but Chrome is not very Mac friendly (yet).

However, in the spirit of the holidays, I recently gave my personal Macbook Air to the Webkit genius AJS, and a Christmas miracle happened: the Chrome underpinnings used in Overgrowth are now Mac OS X compatible!

I hope you guys are happy. This MacBook Air was given to me for doing some work at a web startup and it was awesome!

We also have PPC support, courtesy of the god-like Ryan Gordon. If there ever was a time to be an old school Mac user and Wolfire fan, it's now! The PPC build is untested right now except in emulators, so let us know how it works in the secret preorder forum.

Also new this week are more map editor improvements (blog post on this coming soon), dynamic shadows (so objects can have shadows cast on them, not just terrain), and some other hot stuff.

Here's a screenshot of dynamic shadows: 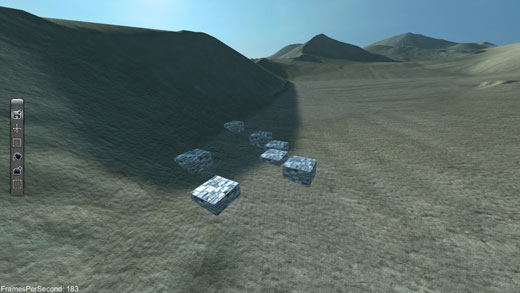 As always, see you guys in IRC and the forums.

Overgrowth is #1! Tiki Towers: the man fights back